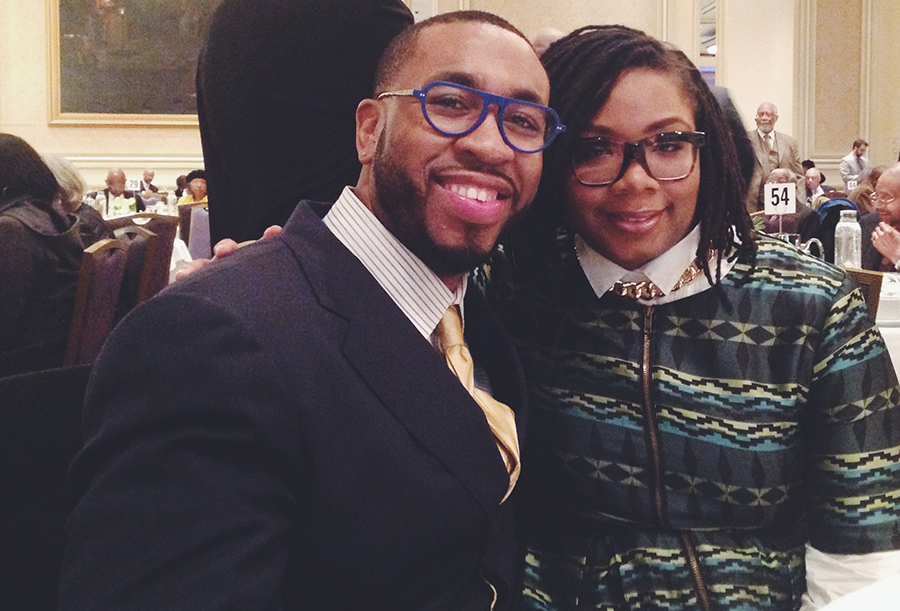 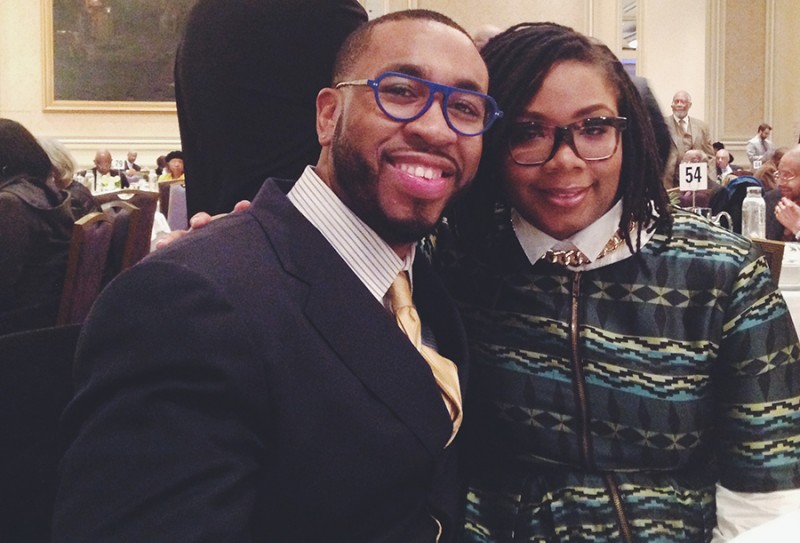 Nikia Jefferson, bka as “the fashion enabler”  ChiTownFashionista and Melvin Jefferson II, are one of SocialifeChicago’s favorite couples. Their love radiates like the sun on a polar vortex day. I have known them for some time and appreciate them sharing their story of love, courtship and how they keep marriage fresh.

SLC: How did you two meet?
Nikia: It was through his sister. His sister and I were best friends in high school and then Melvin and I  became good friends in college, I was beginning at Uof I and he was just finishing.
It was our love of music that connected us though we were friends for about 6 years before we started dating.
Melvin (laughs) we were friends forever.
Nikia: It was during my trip to London, which about 8 months, when we began missing each other more. I would get up at midnight London time to call him.
I came home during that 8 month period for my 10 year high school reunion and we spent every day together.
When I was heading back to London he told me, “when you get back things are going to be different” but I really didn’t understand what he meant. At that point we knew we liked each other but never pursued it.  Once I came back to the States (In December) we became official and spent every day together and he proposed 3 months later.

SLC: Why did you wait so long?
We were friends but were also firm believers in things happening at the right time.
There was never a right time up until we started officially dating I guess. We were in relationships with other people at some point during our friendship. The stars didn’t align maybe because we were in friend zone for a while.

When you are married to that person you feel connected spiritually and emotionally. I can tell when she is not happy and when she’s not I’m not happy. I always want to keep her happy. It’s the truth.

SLC: How much did the family dynamic and them getting along play a role in your relationship?
Both: HUGE! Family is a big priority for the both of us. I don’t think it was a deal breaker but neither of us would have been with someone that wasn’t family focused. Love, of course, will sustain you but the quality of life is much better if they get along
Melvin: we are very blessed because I have friends that dread their inlaws but I kick it with mine. I love my mother-in-law, I call Nikia’s mom, mom. We are definitely blessed.

SLC: Did your parents know each other or met through you?
Nikia:  They met through us because I was best friends with Melvin’s sister and we would invite each other to both our parties or get togethers we would have.

SLC: How long have you been married?
It will be 6 years March 15

SLC: How do you keep it fresh?
We make a conscious effort to, its a bit harder now that we have MJ III but we like doing spontaneous things. We like to do staycations and get out and we love to go out to eat and that’s fun to us.  We love to joke with one another, dance around the house and being carefree.

SLC: Do you have your own identities?
Absolutely! That was so important for us to have our own thing. It was important to have our own group of friends and our own activities and things we do but supportive of each other but not always all over each other.
Melvin: Some couples work that way, but personally its important to have my own identity.
Nikia: We are so mushy though. We started a daily email thing when I was in London. He would send me a good morning email and tell me to have a good day and til this day, he will send me the first email and we always end it with something funny and  related to something that may have happened that day or day before.

SLC: Did you live together before getting married?
Nikia: We did for about 6 months ONLY and ONLY because his lease was up. It was a difficult decision because of my christian background. But our parents knew.

SLC: Among your circle of friends, the way  you met and courted are you the exception to the rule?
Ours is quite unique for sure, though I proposed in 3 months we pretty much dated and we knew each other very well before then. 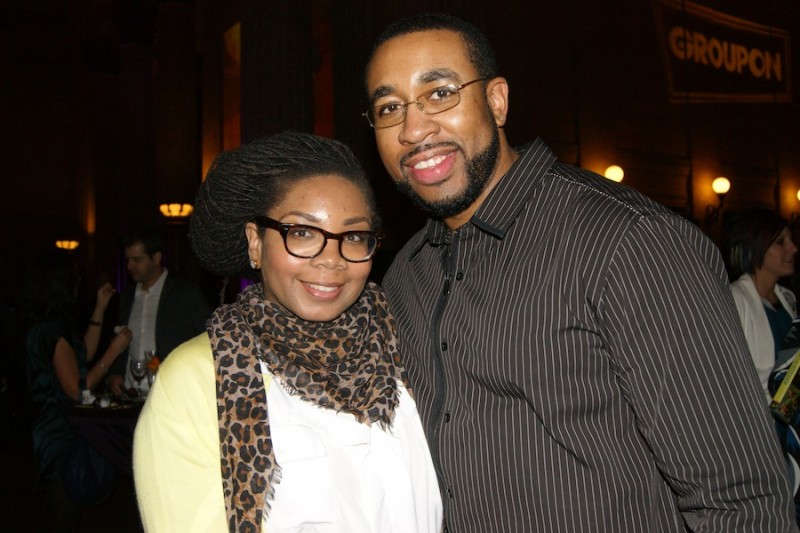 SLC: Did you have any fears she might say no? How did you propose?
Melvin: I knew she was going to say yes. I felt it in my heart, I knew in my heart she was the one and I felt she knew I was the one for her. I was nervous though.  I knew I wanted to do something she wouldn’t expect.. We went  to see “300” in IMAX, after that we had a carriage ride and I proposed to her then. She may have mentioned that she always wanted to do it that way.

I tricked her when I got the ring. I told Nikia I was going to workout. At the time I knew nothing about jewelry or diamonds, but I went, took a class and they explained everything about it.  I knew about carats were the higher it goes the more it costs and I wanted to get her the most expensive one within my means. I got the ring and when we got to the movies, I kept checking my pocket, I was so nervous.

SLC: What is your go to song that you play for your wife/husband that just gets you out of the dog house?
Melvin: Wow there are so many but if I have to say, it will have to be V “Who would I be”
Nikia: V “Who Would I be”  or Uncle Sam “You Make Me Feel Like”

SLC: Things you did before marriage that you gave up?
We did a shred party. We all brought cards and notes from past relationships that we kept and just ripped and burned them all up.
In this digital age now it would definitely be difficult. You may have to have a delete party from all your emails *laughs*

SLC: Happy Wife=Happy Life
Melvin: I think its 100% true, we say it jokingly around the house. When you are married to that person you feel connected spiritually and emotionally. I can tell when she is not happy and when she’s not I’m not happy. I always want to keep her happy. It’s the truth.
SLC: Men our generation have lost touch with how to court and date, how would you  have dated in this tech age and what advice can you give to those dating now in the digital age?
Melvin: You are a product of your environment, in my opinion. If I grew up in the digital age, I probably would utilize facebook/twitter to date.  If you  tell someone now, hey write me a letter they would probably say “write you a letter?! what’s that? what’s paper?”
If I grew up with letter writing and things like that I would do that because that’s what I know.
As far as advice, do not Direct Message lewd pictures. When initially trying to get to know someone, do it the traditional way. Ask for their number, definitely do the letter, thats dope. Take the initiative and the effort to let them know you are interested. Once you have your groove and actually dating, then you can use social media.

Nikia: yes but you have to understand the boundaries. Some thing you have to keep personal between the two of you. Once you put it out there it’s for people to judge when it should only be between the two of you.  We keep  things  between the two of us. We don’t really talk to our family when we have disagreements, which we rarely ever do.
Melvin: Even though we all love each other, its family and sometimes your family will take sides and I never want anyone to put Nikia down or say anything ill about her, you know? I put her on a pedestal forever and that’s where I want it to be. When we go to sleep at night, it’s squashed, nothing drags on overnight, EVER!

Marriage is important to us because we live by example through our parents; they’ve been been married over 30 years. When we say better or for worse, we mean it. Melvin even says “I’m with you for life and into the afterlife . I’ll be in heaven like whaddup” *laughs*

We love to joke with one another, dance around the house and being carefree.

What is Melvin’s favorite restaurant? Ruth’s Chris.
What was the first meal you made him? I don’t really cook but I think it was jambalaya.
Where is Melvin’s dream vacation? Tokyo

What is Nikia’s favorite restaurant? Ruth’s Chris
What is Nikia’s dream vacation? Fashion Week in London
What is the first meal you cooked for Nikia? Probably a cheeseburger

Chuck & Candace Jordan On Her Proposal & Marrying Your Best Friend