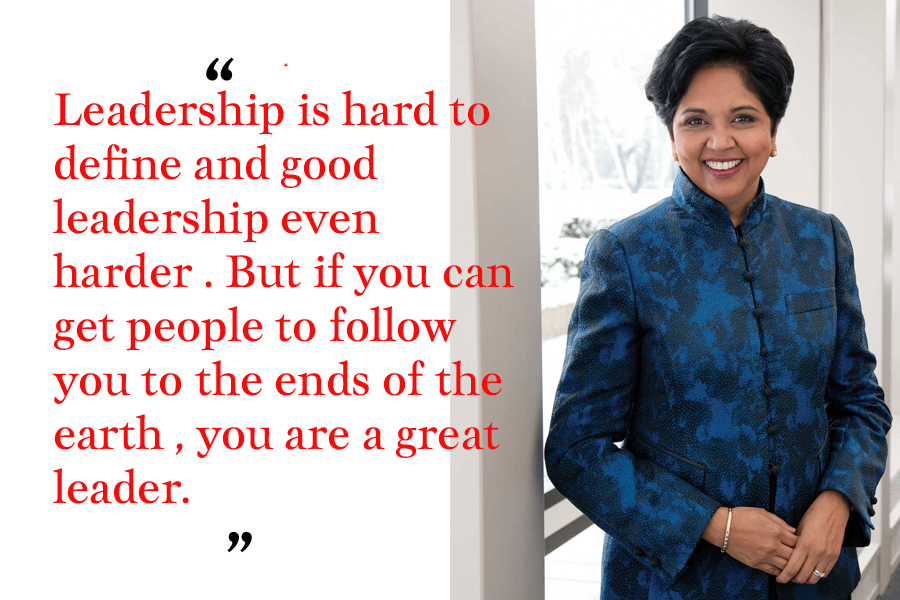 In 2006, PepsiCo announced the appointment of Indra Nooyi as its Chairman-CEO catapulting her into an exclusive circle of women CEO and few leading Fortune 50 companies. Prior to being named CEO, Nooyi had joined PepsiCo in 1994, then named CFO in 2001. According to some reports, the company’s annual net profit has risen from $2.7 billion to $6.5 billion during her tenure, no small feat. Yale School of Management will name its deanship in honour of the India-born CEO Indra Nooyi as she gifted an undisclosed amount, becoming the school’s biggest alumni donor and the first woman to endow a deanship at a top business school In celebrating her decades long role in the position, Nooyi shared some life lessons that we think you can certainly use in all facets of your life as well.

Noting that though she has had her share of challenges over the years, inspiration and support from family, friends and colleagues and other sources of wisdom have helped her learned many lessons along the way.

“I’m learning new lessons every day. But these are the seven critical lessons I wanted to share with you. These seven lessons translate into the seven characteristics of a great leader: Vision. Persistence. Persuasion. Listening. Learning. Collaborating. Humility. Probably no single person embodies all these virtues. I know I don’t. But anyone who can do these seven things, who possesses these seven qualities, will be a formidable leader.”

1)  EVERYONE NEEDS A VISION 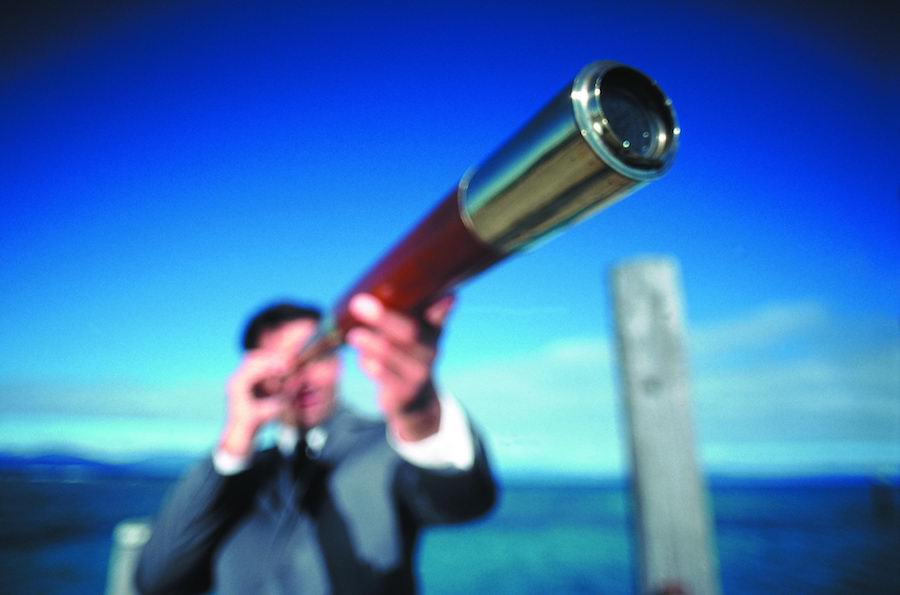 As it is written in the Book of Proverbs, “Where there is no vision, the people perish.” The same can be said of any institution.

When I came on as CEO, I didn’t want to completely change the direction of the company. But I also believed we needed to bring a new sense of meaning to the work we did every day. We called it, “Performance with Purpose.”

It was a philosophy that also pointed to a larger idea that’s fundamental to how I see the world – the idea that companies don’t exist in a vacuum. We should be responsive to the needs of the world around us. Performance with Purpose is our way of doing that.

So, that’s lesson number one: Come up with a vision that not only reflects the direction of a company, but moves people, inspires people to make it a reality.

A while back, The New Yorker published a great cartoon. The caption read: “Yes, the planet got destroyed. But for a beautiful moment in time, we created a lot of value for shareholders.” It not only made me laugh, it made me think about how important it is to balance short-term and long-term interests. So, my second lesson is to think hard about your time horizon.

By embracing Performance with Purpose, we were, by necessity, focusing not just on the short-term, but the long-term. Not just on the level, but the duration of returns.

When you focus on the level of returns alone, you’re producing returns that, however high they may be in the short-run, are not sustainable.

At PepsiCo, we’ve adopted a different strategy, one that we believe balances both the level and duration of returns. As a result, we’ve delivered good returns that have grown consistently and sustainably over a long period of time.

The focus of my third lesson is the importance of persuasion. Right after I announced Performance with Purpose, I paid a visit to the Frito team in Plano, Texas. They were my first recruits. I armed them and others at the company with the messages they needed to help persuade the rest of the organization to embrace Performance with Purpose.

Not every meeting was successful. In fact, I faced a lot of resistance. Critics told me to forget all this nutrition stuff and just focus on selling more chips and soda. It was tough hearing from them. But alongside these critics also emerged a community of supporters.

So we stuck with it and teamed up with others in the industry to create the Healthy Weight Commitment Foundation. And together, we removed 6.4 trillion calories from our food and beverage products, surpassing our pledge by more than 400% three years ahead of schedule.

Today, Performance with Purpose has become ingrained into our culture, which never would have happened without community support. It’s crucial, not just to have a clear message, but to have a critical mass of supporters who can help you deliver it.

My fourth lesson is about perhaps the most important part of persuasion: listening. There are always people with ideas for how we can do things differently – ideas we may not want to hear. But I’ve found that when I’ve been willing to listen, I’ve been better for it, as a CEO and a person.

We get feedback from our consumers and employees at PepsiCo, but I’ve also found that some of the best advice has come in moments I least expected it.

Once, I was taking ballroom dance lessons and my instructor was struggling with the lesson. “Why?” I asked. He replied, “Because you’re trying to lead when you need to follow.” Then he added, “If you learned to follow, you’d be a better leader. And it would make you a better dancer.” What a profound lesson.

There’s a reason we have two ears and one mouth. We should do more listening than talking. We should lead as CEOs. But we should also learn to follow, if needed. We should listen to the wisdom all around us.

5)  BE A STUDENT FOR LIFE
My fifth lesson is to keep learning. I’ve tried to be a lifelong student. That’s especially important given the age we’re living in. Data analytics, automation, and other new trends and technologies are transforming our industry and our world.

If we’re serious about navigating all this change, we need to continually educate ourselves. That’s why I recently took a course on Big Data. But being a CEO today requires more than just taking a course. It requires getting out of our offices and seeing things up close.

Everywhere I go, I talk to as many people as I can to try to get a full picture of our business. I talk to customers, field salespeople, and all our employees. I talk to elected officials and civic leaders. I take photos of how our products look on the shelf. I also attend industry conferences to stay on top of the larger trends that will disrupt or define our industry in the coming years.

I’m constantly trying to consume as much information as I can from as many sources as I can. I can’t afford to stop learning. None of us can. CEOs need to be students for life, and all our employees do, too.

6)  PEOPLE ARE EVERYTHING
That brings me to my sixth lesson, which is that people are everything. The success of an enterprise usually comes down to one thing: the team.

In the past, if you wanted the best talent, it was all about the job. In today’s world, it goes beyond that. You need to appeal not only to your employees’ heads, but to their hearts. When Steve Reinemund was CEO of PepsiCo, he was great at that. He’d send hand-written notes to employees thanking them for a job well done.

When I became CEO, I tried to do the same. But the way I thought about all this changed completely in 2007 when I traveled to India to visit my mother for the first time after being named CEO. A steady stream of family and friends came into the house. They’d go right over to my mother and say, “Congratulations.” Or “You did such a good job raising Indra.”

Watching them, I realized I’d never done for our senior executives at PepsiCo what my mothers’ family and friends were doing for her. So, as soon as I got back, I decided to send a letter thanking the parents of some of our executives. And since then, I’ve sent similar letters to spouses.

The impact of these letters has led to some of the most meaningful experiences I’ve had at PepsiCo. If I have one request for those of you reading this who lead people, try this. The reactions you get will move you more than you can know.

7) “LEAVE THE CROWN IN THE GARAGE”

None of us is just an employee. We’re also mothers and fathers, wives and husbands, daughters and sons, trying to balance multiple roles. And that’s what my seventh lesson is all about.

I’ll never forget coming home after being named President of PepsiCo back in 2001. My mother was visiting at the time.

“I’ve got great news for you,” I shouted. She replied, “It can wait. We need you to go out and get some milk.”

Then she says, “Let me explain something to you. You may be President of PepsiCo. But when you step into this house, you’re a wife and mother first. Nobody can take that place. So leave that crown in the garage.”

She was right, of course. No matter who we are, or what we do, nobody can take our place in our families. Now, I’ll admit, I’ve found it’s rarely possible to be the kind of mother, wife, employee, and person you want to be – all at the same time. Often, you need to make a choice, and that’s especially true if you want to be CEO. There’s no way around it.

And yet, for all the painful choices my husband and I have had to make, I also know our family has been incredibly fortunate. Many families in this country don’t have extended family to help with childcare or jobs that give them the financial means to pay for additional support.

This is a challenge we need to take on urgently. We need to come together, as corporations and as a society to support workers who are caring for young children, aging parents, or both.