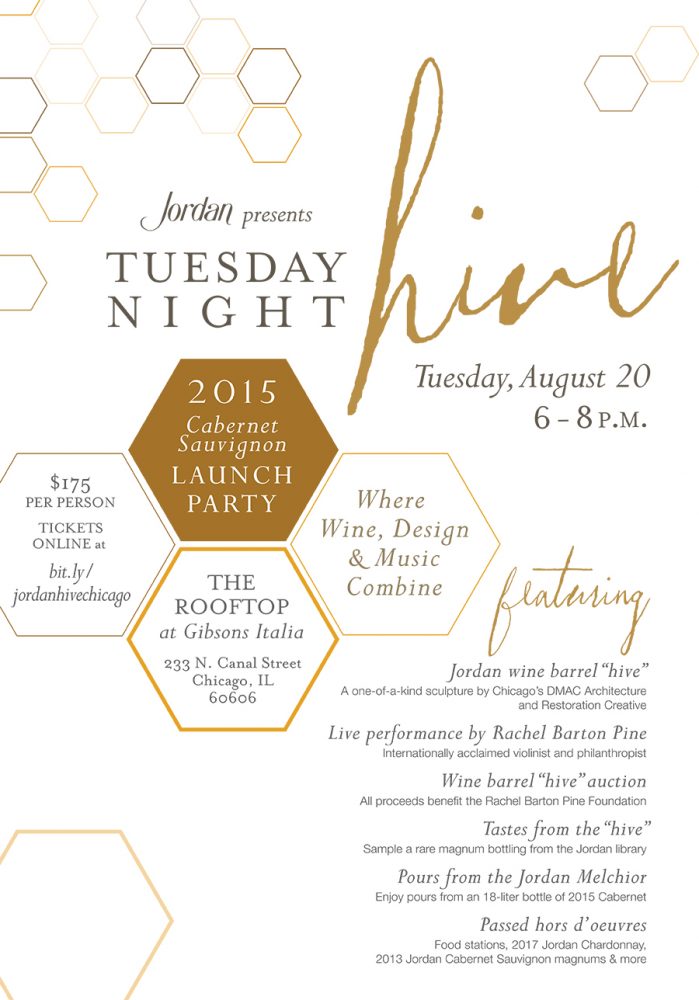 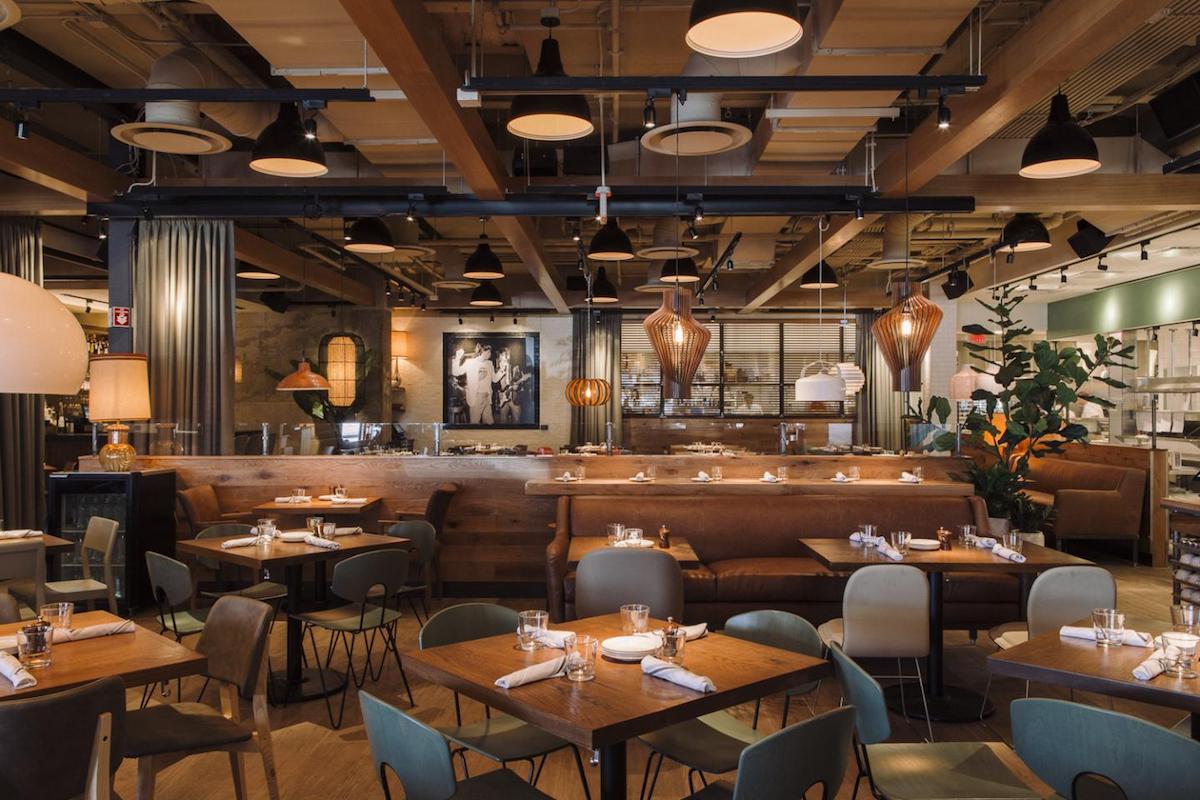 Lettuce Entertain You Enterprises (LEYE) the Chicago based Rich Melman founded parent company to 120+ restaurants in 9 states including The Beatrix is taking its show to the happiest place in the world.  According to a recent report, Beatrix, the neighborhood restaurant, coffeehouse and grab-and-go market featuring healthy food options including vegetarian, gluten-free, and vegan along with fresh-squeezed juice cocktails, will open its first restaurant in Florida at Disney Springs West Side that already boasts six James Beard Award-winning, chef-owned food havens. The restaurant will also offer a bakery and full-service bar with a selection of all-American beer and wine.
“Beatrix represents the way people are eating today – it’s that mix of health and comfort. Whether grabbing a cup of coffee and your favorite pastry, or having a cocktail, lunch, or dinner with friends, it’s your neighborhood meeting place.” -Executive Partner and Divisional President, Marc Jacobs

Award-winning international design firmWare Malcomb provided interior architecture and design services for the new Golden State Foods Innovation center in the West Loop. This is the Irvine, California-based food company’s 10th center. The project has been awarded the People’s Choice Award in the 7th Annual IIDA Illinois RED Awards program, which honors projects for their exemplary design and innovation. 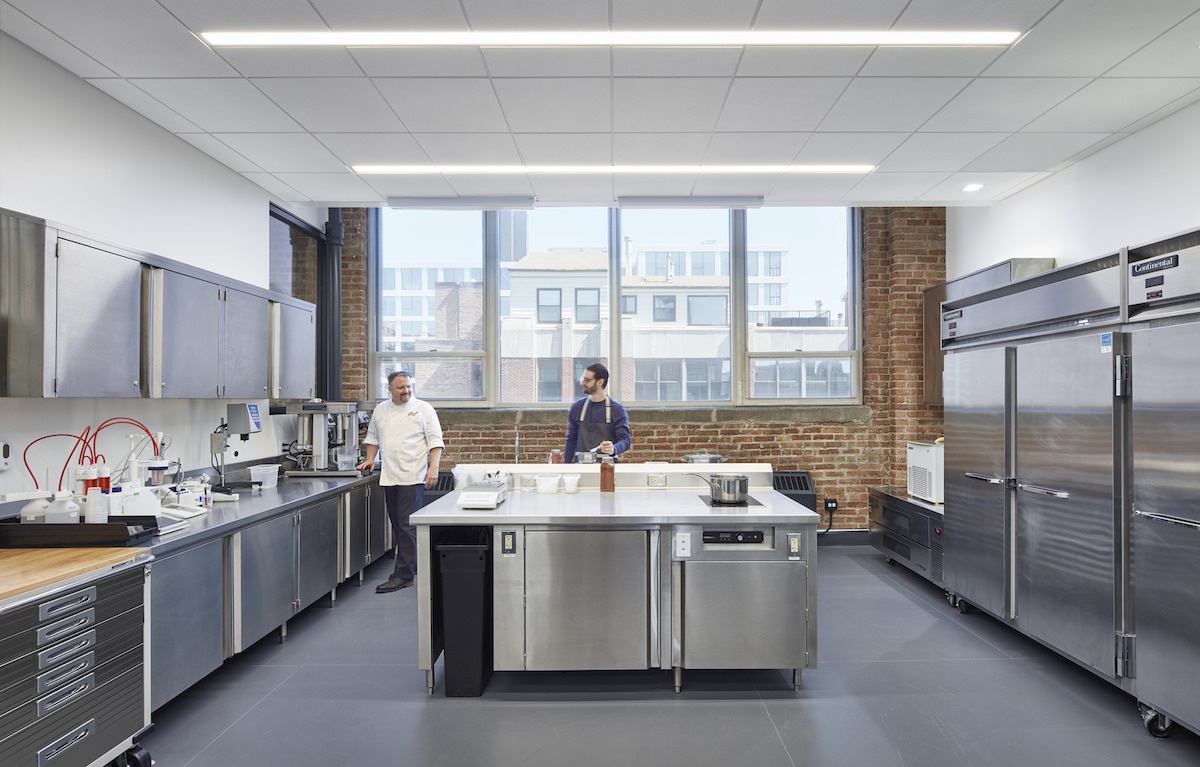 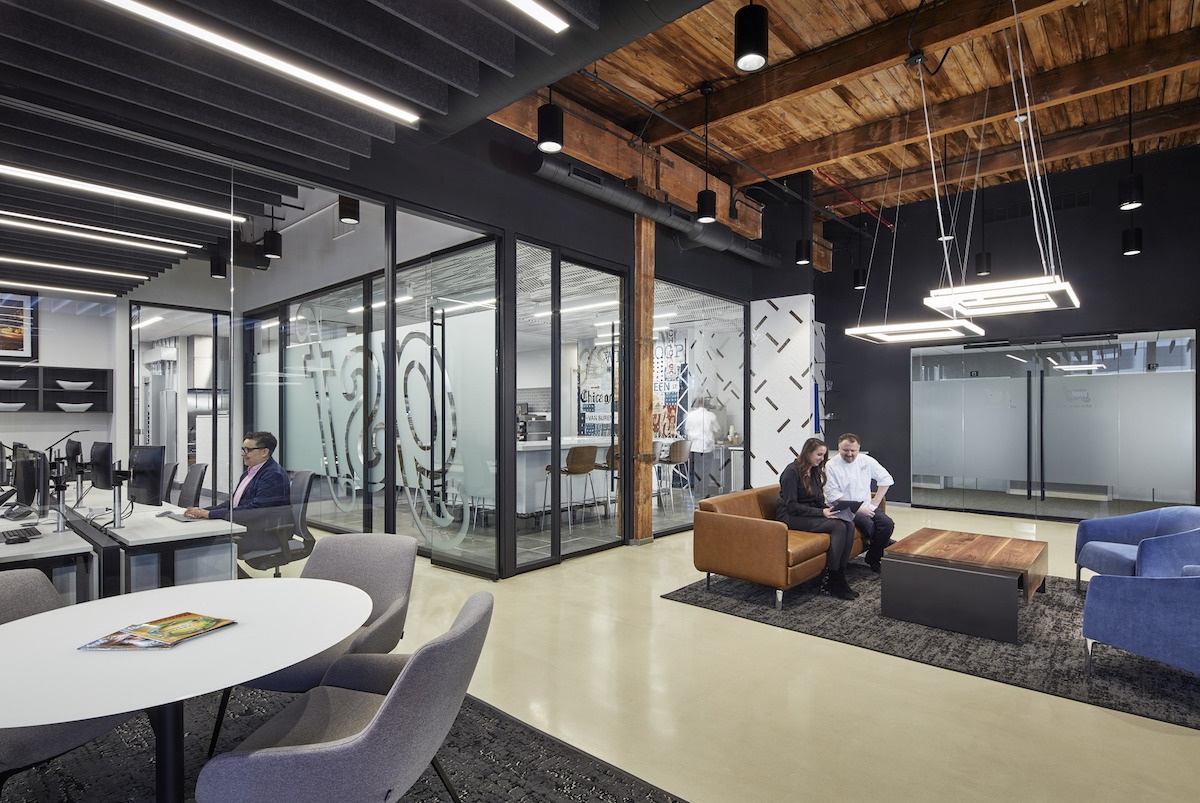 Jeni’s is opening their seventh Chicagoland scoop shop this time its in Oakbrook. According to the release “We go where our customers are and e-commerce data showed a high volume of online orders coming from Oakbrook…. and Oakbrook Center has some great brands — Madewell, Kate Spade, Warby Parker — and is a great gathering spot for families, whom we love to serve.”
The 1896 sq. ft, one-story shop with a waffle-cone making station on display and patio seating is located between Nando’s Peri-Peri and Potbelly Sandwich Shop in the Oakbrook Center. 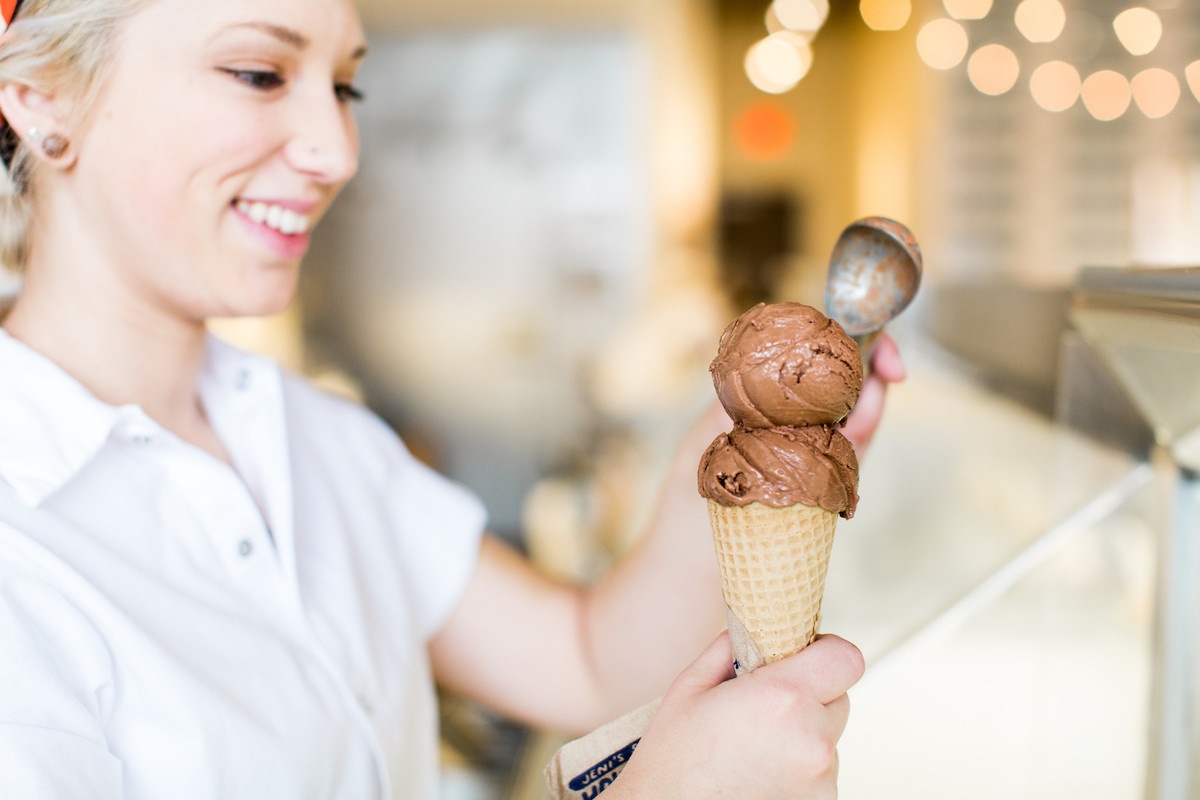 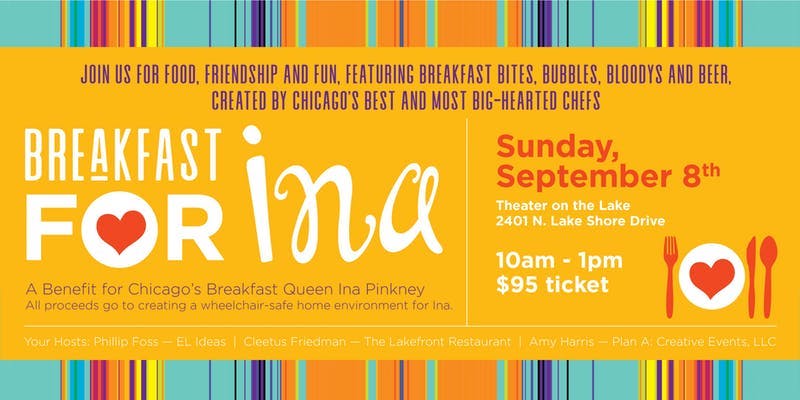 The upcoming fundraiser billed as ‘Ina-inspired brunch bites, bubbles, bloodys and beers,’ with all proceeds going towards offsetting the varied costs of creating a safe, wheelchair-accessible home environment for Chicago’s beloved Breakfast Queen. Many Chicagoans remember ‘Breakfast Queen’ Ina Pinkney’s who closed her namesake restaurant, Ina’s, in the West Loop after 33 years in business. Pinkney badly broke the thigh bone in her already-compromised, polio-affected leg. After a difficult surgery, some major complications, and a long, painful rehab period, the fiercely-independent 76-year-old chef, columnist, cookbook author and restaurateur who is back to writing her column, for all intents and purposes, is wheelchair-bound. Anyone who knows Ina knows that being in this debilitative state is not easy for her … nor is she asking for help.

That’s why some of Chicago’s best Chefs are stepping in to be part of this benefit for her. Led by Cleetus Friedman (The Lakefront Restaurant) and Phillip Foss (EL Ideas), a ‘Who’s Who’ of prominent Chefs will present, ‘Breakfast For Ina,’ a benefit event, set for Sunday, September 8th, from 10am to 1pm, at Theater on the Lake, 2401 N. Lake Shore Drive. In addition to Friedman and Foss, the impressive ‘Breakfast For Ina’ Chef line-up includes:o.

Tickets are $95 each, and can be purchased here

Roka Akor at Stefani Prime (5755 North Cicero Ave, Lincolnwood) on Thursday, August 22nd for a collaborative dinner available for one night only. Chef Ce Bian of Roka Akor and Chef Claudio Ulivieri of Stefani Prime blend Japanese and Italian cuisine for a brilliant five-course tasting menu, paired with hand-selected wines and sake from both regions. Dinner is $99 per person and begins at 7pm. Reservations can be made by calling 847.696.6755.

SIGHTINGS OF CELEBRITIES & CHI-LEBRITIES DINING ON THE SCENE:

The celebs sightings at TAO Chicago over Lollapalooza weekend was madness, in a good way. The first night of Lolla was off to a strong start, artist Taylor Bennett, was spotted dining at TAO Chicago with a group of friends. Swedish DJ and festival artist Alesso was also there. Before taking the stage to perform for guests at the official Lolla after show, Party Favor had dinner with his girlfriend and some friends. Lolla night 1 headliners The Chainsmokers hosted a private dinner and party in the restaurant’s Ink Bar where Bebe Rexha also popped in. Fresh of the release of his new “The Big Day” album and surprise appearance on stage with DeathC ab for Cuties at lollapalooza, Chance the Rapper took the stage as the surprise special guest for the official Lolla after show. MLB legend Roger Clemens kicked off his birthday festivities there as well. The sightings Saturday didn’t stop there, professional gamer Tyler Blevins aka Ninja enjoyed bottles of Dom Pérignon and Belvedere Vodka next to the DJ booth while YouTube star David Dobrik chilled with friends. Euphoria’s Sydney Sweeney was also spotted dining at TAO. Chicago Bears’ Khalil Mack and Eddie Jackson, Denver Nuggets’ Michael Porter Jr., and Milwaukee Brewers’ Zach Davies and Jeremy Jeffress had an athletes pow wow. Closing out the weekend of sightings at TAO was singer Rosalía Vila Tobella and artist Sheck Wes, who had to be hot performing in a sweater, took the stage at the official after show for the final night. Check out the gallery below for more pics.

Kentucky Owl®, “The Wise Man’s Bourbon,” announced the release of Kentucky Owl 10-Year Old Kentucky Straight Rye Whiskey Batch #3. At 114-proof and 57% alcohol by volume, the highly sought-after whiskey will start arriving on store shelves and behind bars in select markets in late August. Rye #3 is crafted with the same tradition and attention to detail as each of the batches of Kentucky Owl bourbon and rye that came before it. Batch #3 features citrus, orange juice, grapefruit, oak, anise, and barbeque spice on the nose. The combination of barrel sweetness, caramel candy, creamy vanilla, toffee, and hazelnut coat the palate before moving into a finish of licorice, absinthe, nutmeg, and a mild flash of cayenne pepper. Kentucky Owl 10-Year Old Straight Rye Whiskey Batch #3 will be available in limited retailing for $199.99 for a 750mL bottle.