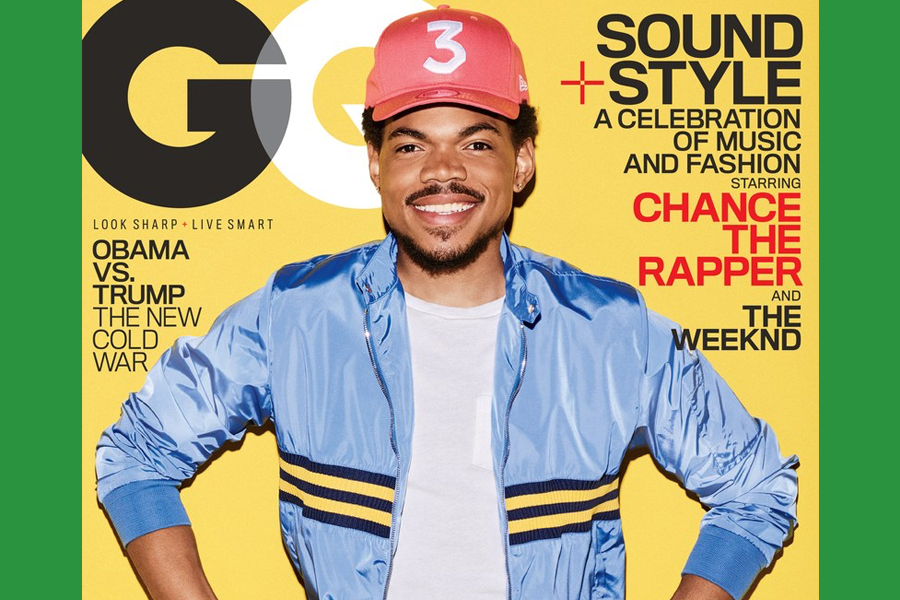 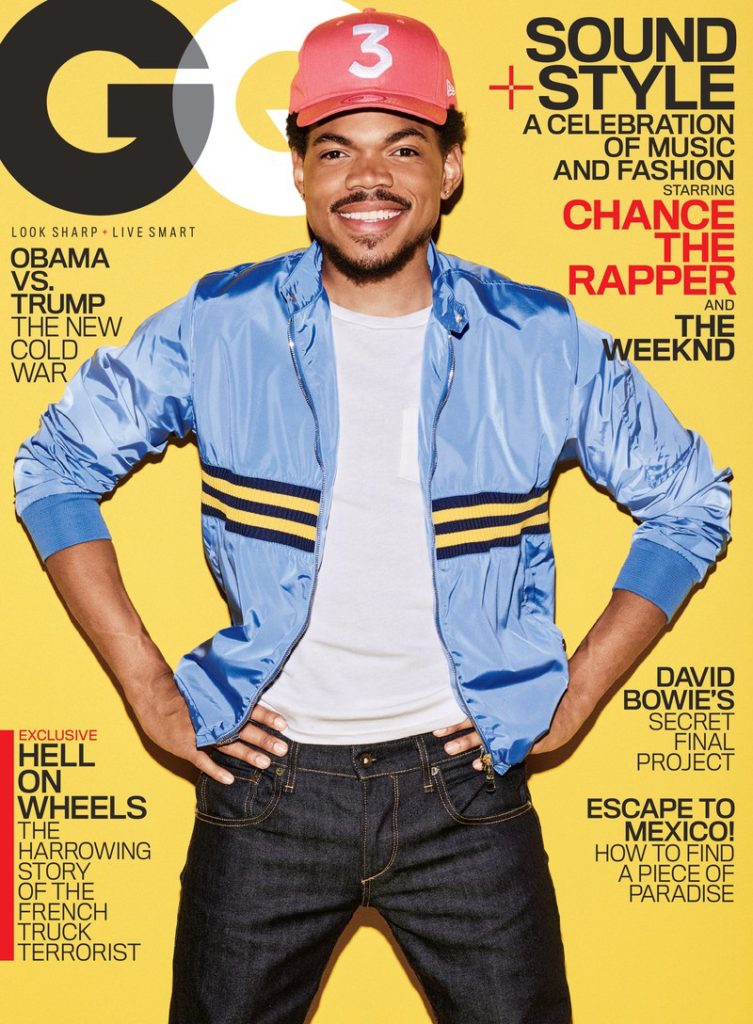 Chicago’s own Chancellor Bennet aka Lil Chano from 79th bka Chance The Rapper, is already off to a great 2017 after a stellar 2016. Earlier this month it was announced he will be headlining Governor’s ball music festival as well as being one of the star performers on Bonaroo’s bill this year and now he’s on the cover of GQ magazine’s February issue. Though he shares the double cover with The Weeknd, the mag, dubbed them two of the world’s biggest musicians. The feature titled “The Gospel According To Chance” by mark Anthony Green talks to him about everything from fame, his family, Trump presidency and more. 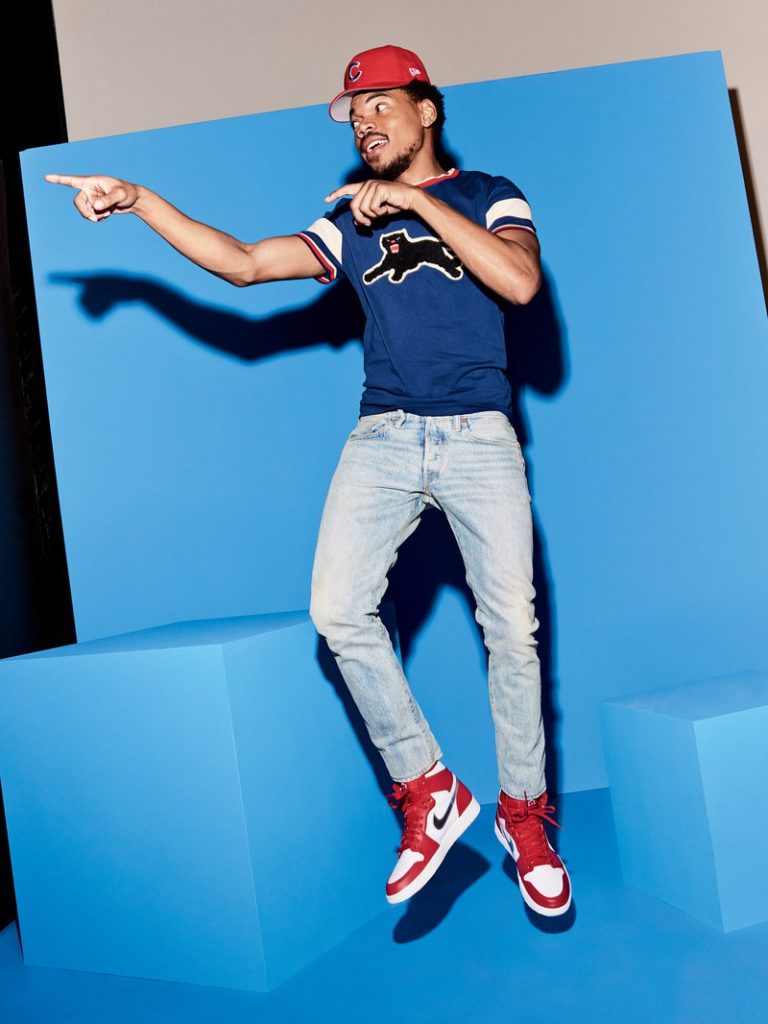 You can read excerpts from the interview below:

“With his third mixtape, Coloring Book, Lil Chano gave the country joy in a dark year, blessing us with good vibes and hard bars. His ascent from Chicago local hero to world-stage rapper has been marked by his refreshing, carefree optimism and socially conscious heroics—all done without the support of a record label. In conversation with Mark Anthony Green, Chance touches on why he always rocks the cap, his embarrassing Facebook videos from high school, and whether he should actually be called Chance the Artist.” The weather in downtown Chicago is on brand: blistering cold. Inside are engineers and beat tweakers and Shake Shack runners and weed deliverers and weed rollers and childhood friends now playing the integral part of weed passers. And there’s Chance the Rapper, the 23-year-old man-child—new favorite of Barack Obama and Lin-Manuel Miranda, “nephew” to Beyoncé, locker-room go-to for LeBron, heir apparent to Kanye West. The scene in the studio is Hip-hop 101: A small room with a rapper and people watching the rapper. Beats blasting from rectangles.”

GQ: Your name, Chance the Rapper, is funny. A generational joke, in a way. But you’re nominated for seven Grammys. People are saying you’re going to be one of the greatest to ever do it.
CHANCE THE RAPPER: [laughs] I can super appreciate all that pressure. I’ll take that.

Your name seems more temporary than your talent, though. It’s too silly, in a way. Do you ever think about changing it or just going by Chance?
Yeah. I think it’s everything that you’re saying, but going in the opposite direction. My dad used to always say, “You need to change your name to Chance the Artist. This song, this is different.” I remember one day I was with Justin—my best friend, who has always been really good at school, really smart, really good at speaking to people. I remember my dad would introduce us to folks and they would ask, “What’re you going to be when you grow up?” Justin’s fucking 7 years old talking about, “I’m going to be a biomedical engineer.” You know, he’s just that guy. And I remember they asked me, and I said a rapper. And my dad laughed it off, like, “No, he doesn’t…” You know?

And I remember that shit used to bother the fuck out of me, because I thought Kanye West was the smartest man in the world. The best poet in the world. The freshest-dressed in the world. That’s what a rapper was to me, and I wanted everybody to feel that way about the word “rapper.” And “rapper,” to me, is pretty much synonymous with the word “black.” It’s a stigma where it’s like, “Damn, I heard Chance the Rapper. I didn’t think he was going to sound like that.” I hate that when you introduce yourself, and you’re a rapper, sometimes you gotta say, “I’m a musician.” Or, “I’m an artist.” “I’m a recording artist.” “I’m a vocalist.”

You should be proud to say: I’m a rapper.
I’m a rapper! You should be able to say that shit and, like, make someone scared in a good way. Like, “Oh shit, you might know the president!” It should feel that way. 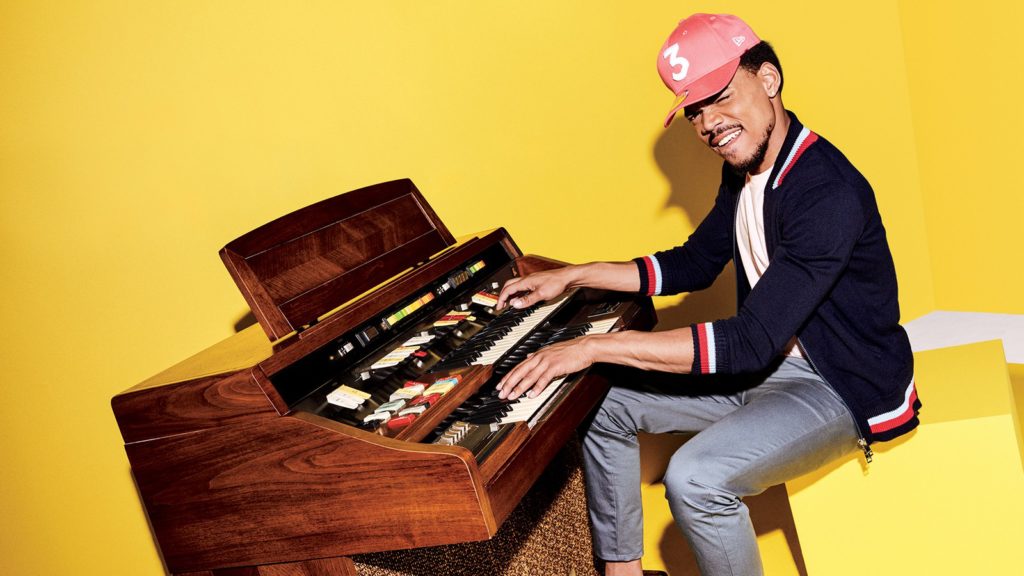 Why the cap?
I used to always rock a cap when I was in high school and get them taken away. It was an excessive amount. Like, so often that at the end of each school year, there would be a box of all the confiscated caps. After they gave back a few caps to other kids, they would just give me the box because the rest were all my hats. So I think, in one part, it’s a rebellion. There are a few things that I have because I’m a man-child. Like I don’t eat vegetables at all. Never. I hate eating vegetables. The only vegetables I eat are lettuce on a burger.

And now the “3” hat is everywhere.
Yeah, so I was like, “You know what? Let’s switch it.” I wanted to switch from the White Sox hat. I wanted to put something else on the hat. And so I decided to do “3.” I just thought that that made the most sense because it was the third project. Also, I was having a lot of trouble figuring out what the title of the project was going to be and what typography to put the title in. The original title for the project was, uh, The Magnificent Coloring Book. But that’s just so many words and it looks so shitty, no matter how I put it on the hat.

Do you want more kids?
Not right now. It’s a lot to try and be a good dad right now. With all the distractions and all the things that I’m limited in doing by living in Chicago and being a person of notoriety. I don’t wanna tack on anything. I want to get my relationship with Kensli down pat and also just get older. I’m 23. I had her when I was 22. If I am gonna have more kids, it’ll be a blessing and I’ll accept it as a responsibility and a privilege, but I’m definitely not trying to have more kids right now.

“I’m a rapper! You should be able to say that and, like, make someone scared in a good way. Like, ‘Oh shit, you might know the president!’ It should feel that way.”

What’s the toughest thing about being Chance the Rapper in a relationship?
Just my time. My time and also my knack for, like, you know, just… Fuck the second thing that I was going to say—let’s just keep it at that.… [laughs]

Wise! What’s the most romantic thing you’ve ever done for a woman?
Oooh, that’s a good question. I’ve done some grandiose things.… Oh! I got it. I had a girlfriend in high school and I published a poem on Facebook about her, and I remember everybody flaming my ass for it forever. I hope that shit is gone, actually. I gotta check.

What’s the downside of being a celebrity?The limitations that come with notoriety?
That’s the main thing. I don’t consider being a musician the same thing as being a celebrity. Celebrity is strictly the fact that if I go somewhere, to a…frozen-yogurt shop

I find that interesting with you. Because you idolize Kanye. Nobody’s less—
Likable.

Golden Globes Switch To Plant Based Vegan Menu For 2020 Ceremony

Right. And less presentable. Does that make it easier for you to do or say the wrong thing?
I don’t think I ever wanted to be like Kanye in personality, though. I think I definitely want to, have always wanted to, have his boldness or assurance in myself. But I’ve definitely seen Kanye do things where I was like, “I’d never do that.” I’ve always been able to defend Kanye. When everybody’s like, “Kanye’s a nut, Kanye’s a nut,” I’m one of those guys saying, “No, he’s saying some real shit.” Like when he went onstage with Taylor, I was, like…well…Beyoncé kind of deserved that. [laughs] I’m rationalizing everything that he does, but I can’t say that in the same position I would do the same things. Being around Kanye, Kanye says crazier shit in private than he does in public, which is hard to believe because he says the craziest things in public. He does have a filter. He’s not a liar or somebody that is going to sugarcoat things when he does speak. But Kanye’s said some crazy shit to me where I respond, “No, I don’t feel you at all.” I always wanted to be more of a person that people enjoy. Somebody that will make you laugh. I’m talking about just my personality, not necessarily how my music sounds. Because I believe I’m a disrupter like Kanye in a lot of ways. 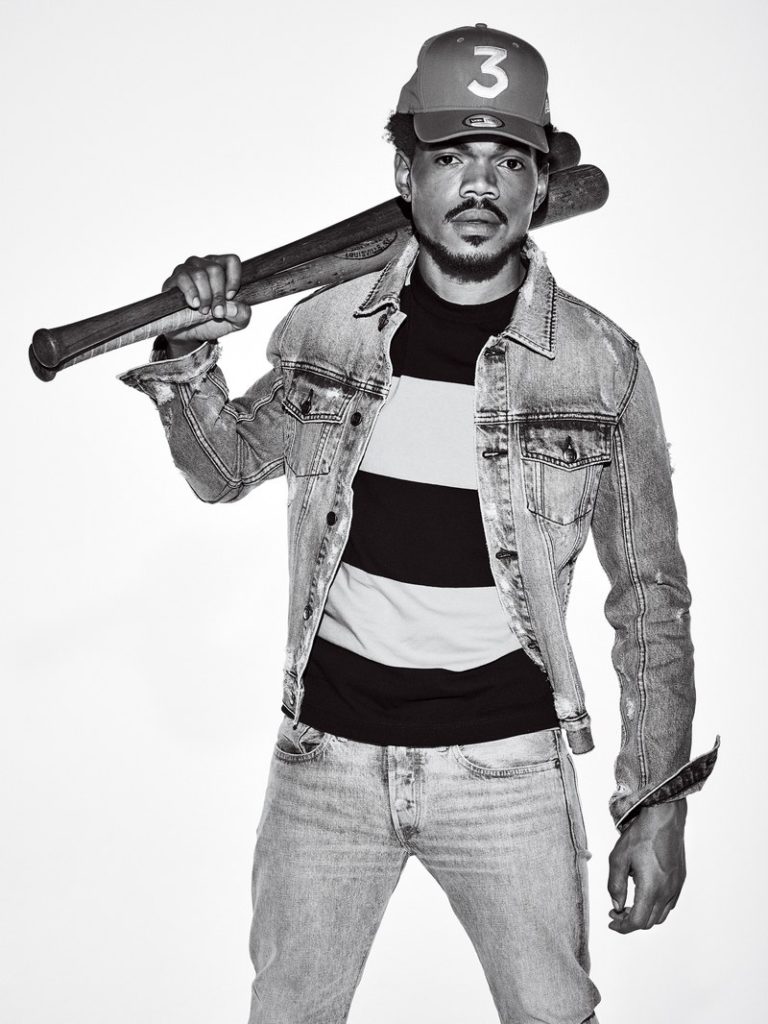 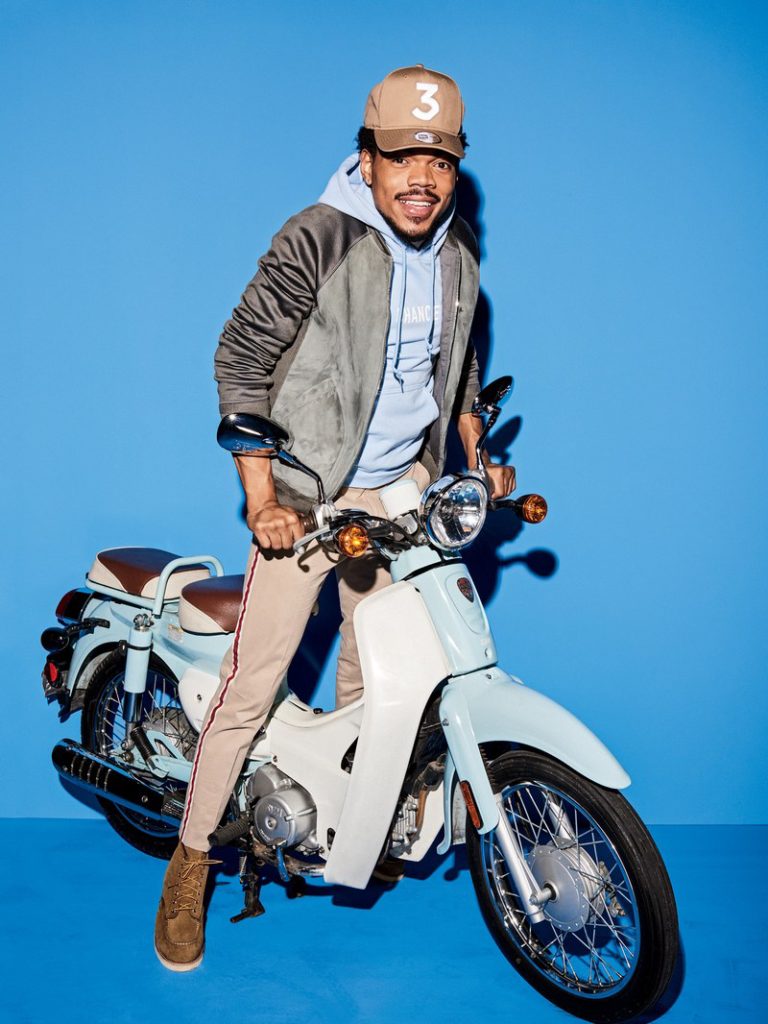 How important are the Grammys—to music, and to Chance the Rapper?
I think the Grammys are super important to music. As a musician, I think it’s the same thing as an actor receiving an Oscar. Do I think that the Grammys are always fully representative of a person’s talent? No. Just like Leonardo DiCaprio didn’t get an Oscar until this past year. And he’s been doing his fucking thing. But I think everybody wants validation, everybody wants to feel like they did right. And I think the nominations are my victory. You know?

Have you ever purchased a chain?
Like a rapper chain? Never. Nothing ever from an expensive jeweler. Nah. Hell nah. That’s not me.

What’s the most expensive thing you’ve purchased that wasn’t a car or a home?
For a second, when I first moved back to Chicago from L.A., I had old habits to break. I would buy very, very expensive Ralph Lauren stuff. I got into Polo really heavy. Like, Oh shit, now this is all I do. I have three-to-four-thousand-dollar merino wool sweaters or cashmere sweaters and shit. What I do a lot, that I had to cut out, was I used to take my friends places and spend a lot of money at fun places on some weird kid shit. I recently took, like, 35 of my friends and all of the Golden State Warriors to Sky Zone. Just because they were in town and I like Sky Zone. 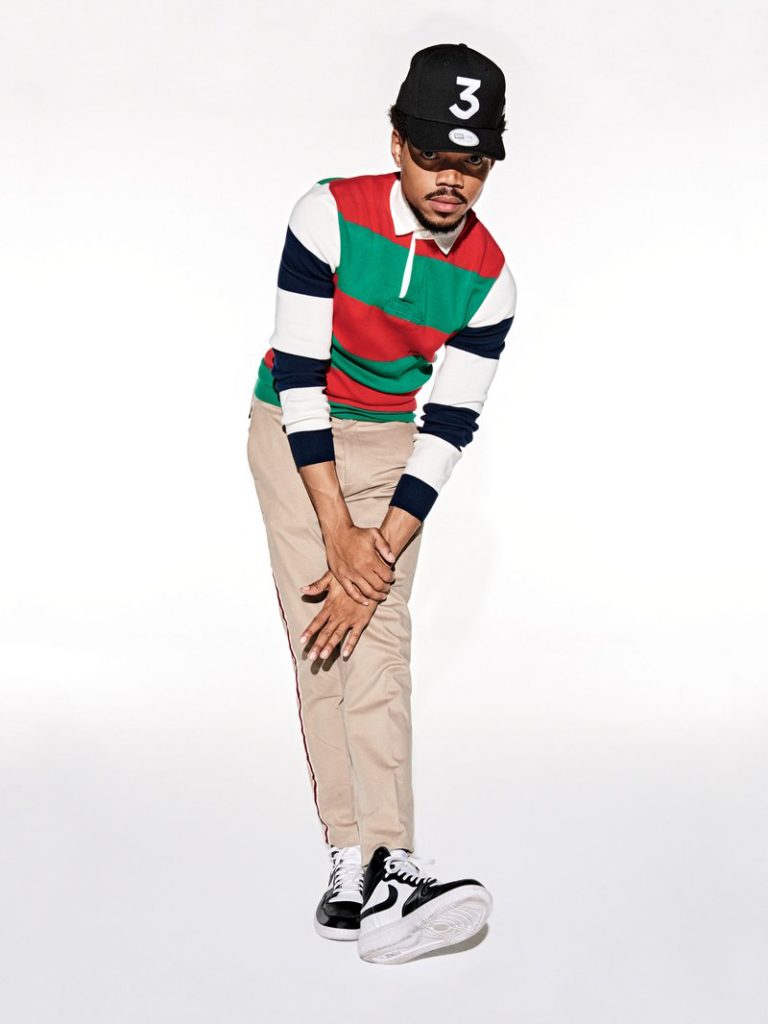 Read the rest of the interview here

All images via GQ; Photograph by Eric Ray Davidson