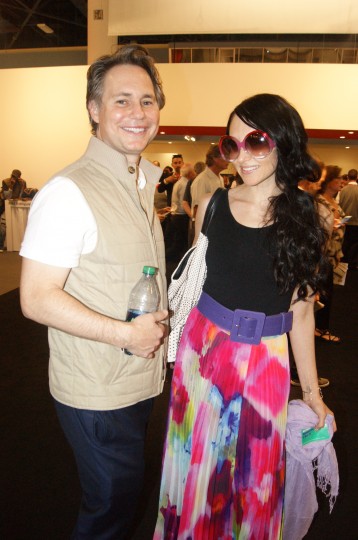 The scene walking in was Vera Wang to my right chatting up friends, Michael Eisner to my left  standing back as Jason Binn was being photographed by Seth Browanirk, with Alice+Olivia’s Stacey Bendet Eisner and a host of other power players. This was just the beginning of an awesome weekend aka Art Basel Miami Beach. The VIP preview night held the Wednesday(12/5) before the fair officially opened to the public was packed with marquee names like Diane Von Furstenberg, Larry Gagosian, Steve Wynn, Martha Stewart as well as deep pocketed Europeans and Brazilians ready to add new artwork to their collection. Art Basel Miami Beach brought, under one roof at the Miami Convention center, many of the top galleries from across the world representing some of the best artists. Chicago galleries Kavi Gupta, Richard Gray, Rhona Hoffman, Valerie Carberry were in attendance. I also had the opportunity to meet Jay Jopling owner of White Cube Gallery in London along with Hikari Yokoyama, their Chicago connection is artist Theaster Gates. Also spotted the Winklevoss twins,  Calvin Klein, separately taking in the fair as well.

As I was walking in I ran into violinist Katarina Visnevska, small world.  The vastness of the Miami convention center is something that can be described in many words but you can’t really understand  it until you trek through. I was warned there would be a lot of walking so I wore flats. Big mistake as there were these gorgeous  ladies in 4/5/6″ heels and the gents equally dapper. A Schnabel was the talk of Art Basel and it wasn’t Julian but rather his son Vito an Art Dealer. Missed 2 major parties that happened the night before-MoCA+Vanity Fair & White Cube party.

The whole evening was so surreal, for example seeing Alex Rodriguez who was wearing a plain white tee and cargo pants just walking by, NBD. Some of the pieces that garnered attention from guests included “Y’all can suck my balls” the Robert Indiana’s “rum run” piece,  the mummy cutout made out of $1 bills, Nick Cave’s untitled pieces and the giant red Lego structure by Los Carpentiros. Kavi Gupta’s exhibition space that housed works from Theaster Gates and Angel Otero was buzzing.

The next day I stopped by the Architectural Digest Oasis Miami at the Raleigh hotel. The folks at AD definitely know what respite means(more to come on AD Oasis Miami). That evening it was off across the bridge to check out the  revamped Intercontinental hotel that’s located next to American Airlines stadium- recap coming up in a later post. I also paid a visit to the Rubell Family Collection in the design district and whoa! The Rubell’s would be the equivalent of the King & Caryn Harris of Chicago. They are major supporters of the arts.

I attended a couple of the parties. Partying in Miami at least for Art Basel is something else! I thought I could hang, yea no. The only downside to it was the traffic oh and the fact that most of the cab drivers don’t take card or square. Let’s hope they fix that for next year.

Art Basel’s main sponsor was UBS as well as Associate sponsors that included Davidoff, NetJets, and the Absolut Art Bureau. Furniture was provided by Herman Miller and the VIP car service was by BMW. The official Media Partners were The Financial Times and The Miami Herald.

For this being my first time, it was a great opportunity to not only take in world class art but also meet some incredibly talented people. Chicago was well represented at the main fair as well as ancillary exhibitions going on around town. Congrats to all and especially to Theaster Gates, Angel Otero, and Nick Cave who’s work were shown by Kavi Gupta, Lehman Maupin, Jack Shainman galleries. Congrats also to Hebru Brantley who sold a piece to Jay Z!

**please note that some of the art work  shown below does include nudity, its art**

Which of these pieces spoke to you? Think you will make the trip down next year?