Creative Entrepreneurs which was founded by Carolyn Dailey, former managing director of Time Warner, received seed funding from The Arts Council in Britain. The site offers guidance on topics including on writing a business plan, raising money, finding work space, IP, going international and finding mentors. Basically the opposite of the below image. 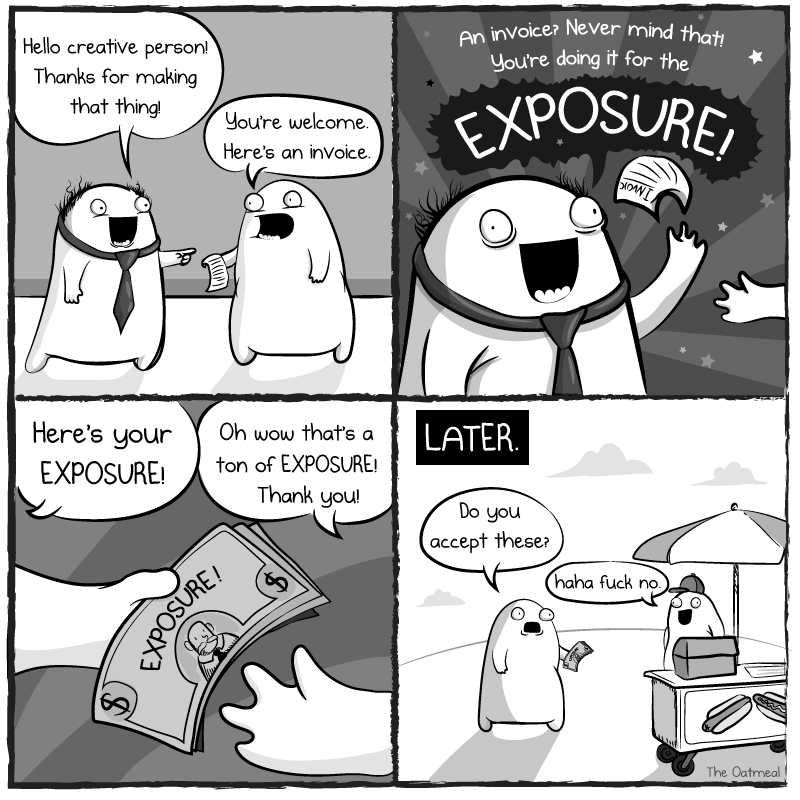 “Dailey called creativity “the next revolution, something that algorithms cannot replace,” and said so many creative people today “don’t even think about starting a business. How many people out there don’t even understand that it’s an option?” Though the creative industry might not be the first thing when you immediately think Chicago though it should be. We have world class museums, some of the top advertising and creative agencies like Leo Burnett, Weber Shandwick, Havas are based here lets not even get started on the great talent that have already left the city due to lack of support or resources.

With the recent disclosure that the city has cut funding for Fashion Focus and with much attention paid to startups that deal primarily in transactional tech, an initiative like this is not only welcome it is necessary for Chicago. As some who works in this area and with many friends who are also creatives, creators of things that aren’t traditionally transactional, this is the sort of initiative we could benefit from. Not everyone will get into 1871. Not everyone knows J.B Pritzker or Kevin Willer not every creative might have the connection to call someone from the Hyde Park Angels group for advice on funding help.  New York City established “Made In NYC” as “an economic development initiative that supports the City’s digital, film, theatre and broadcasting sectors, and will soon support fashion companies as well.”

While there are some resources in Chicago, it’s fragmented and not with the right type of leadership or champions. Imagine if some of the young designers had as mentors or input givers the likes of Ikram, Ellen Sandor, Desiree Rogers, Nicola Jackson, the people who buy these pricey wares.
Imagine if there was a space for these creatives to build and go on to be the next big thing ? Why can’t we have that? Let’s do more than just talk or vent, let’s find ways to champion this initiative in Chicago and take it from an idea to reality. Just as J.B Pritzker and some forward thinking friends championed 1871 and tech startups that have now grown or continue to grow out of it, the Chicago creatives needs something like this.

According to the piece in WWD, “Britain’s creative industries are its fastest-growing economic force, pumping almost 80 billion pounds, or $113 billion at current exchange, annually into the nation’s economy, and accounting for 6 percent of British jobs. From Asia to America, they’re dancing to our music, watching our films and wearing our designers’ latest creations. With all this talent, it’s no wonder that our creative industries form the fastest-growing part of the economy – and are growing faster than any other sector.”

Imagine if Chicago’s creatives didn’t have to go to NYC, Beverly Hills, Paris, Tokyo to get “discovered.”

Below are the names of the individuals named to the City of Chicago Mayor’s Fashion Council who’s task it is “to advise on the development of a coordinated citywide plan to increase opportunities for the fashion industry” if you know anyone named below, mention this to them; ask them what can be done to get an initiative like this going. Chicago is home to a slew of foundations and certainly deep pocketed people, albeit quiet money, trust me they are here. Imagine if some of the unemployed youths from the report released earlier this week used their talents in this sector. I might be wearing rose colored glasses but I think this can be done.

Hotness In The News Friday January 29