Chicago Dining News Bites features news on Chicago’s exciting dining scene. Got a tip or newsworthy item?  Click here or email us at info@socialifechicago.com and let us know..

The dining scene in Chicago, and major parts of the world, which had been uppended by the global pandemic that is the coronavirus COVID-19 is slowly coming back to life. We are lucky to live in a city that offers vast options when it comes to food and beverage, though some of our faves have had to close during the pandemic due to extenuating circumstances. Though restaurants are getting packed as if there was no global pananini, we still offer these news with caution. Dine safe, when/where you feel comfortable. We look forward to the days when we can all gather together for big and small meals at our fave neighborhood spots eating,  mask free, drinking and giving much appreciation to the industry like the Pre Covid days.

Chef Brian Jupiter of West Town’s Frontier restaurant (1072 North Milwaukee Avenue 60642) is one of the Chefs from ten cities across the country selected to host The James Beard Foundation’s Summer Taste America presented by Capital One Summer 2021 culinary series running from June-August 2021. With the restaurant industry having taken a huge hit during the coronavirus pandemic this national, in-person event is aimed to allow food lovers to Eat, Celebrate local independent restaurants, and build support for industry recovery. The in-person event is scheduled to take place on Tuesday July 13 from 5pm CST.
The menu from chef Jupiter’s Chicago stop of the JBF Summer Taste America includes:

Each event ticket includes a three-course meal curated by Chef Jupiter plus beverage pairings. tickets can be purchased for $300 per pair (single tickets not available) at www.jamesbeard.org/tasteamerica. 65% of all tickets sold will go directly to Frontier to support their business, with 35% of proceeds supporting the Foundation’s national programming, including the Open for Good campaign.

Winnetka Gets a New French Bistro

Ballyhoo Hospitality, founded by husband-and-wife partners Ryan and Anna O’Donnell, is bringing a new restaurant to the North Shore of Chicago, inspired by the great cafes of France. Pomeroy (844 Spruce St, Winnetka) which will be helmed in the kitchen by Executive Chef Jason Paskewitz is set to open this summer of 2021 in Winnetka. “Paskewitz intends for the cuisine at Pomeroy to be approachable and pure. The chef is particularly excited for the restaurant’s take on seafood. A small oyster bar will serve fresh oysters shucked to order as well as chilled “Fruit De Mer” seafood platters. The restaurant’s entire section devoted to”…Avec Frites,” will provide options for everyone, including chicken, steak, a burger and a grilled “lazy man’s” lobster. Pomeroy restaurant Winnetka’s Plats du Jour will showcase the chef’s command of the classics. While “Les Foie Gras,” allows the technical foie wizard the chance to interpret the luxe ingredient. Other classic bistro fare will include Poulet Roti, Filet Au Poivre and Trout Almondine.” Ballyhoo’s other restaurants include Winnetka’s Sophia steakhouse, Gemini, Coda di Volpe, Old Pueblo and Andros Taverna. Stay tuned for more additional details on this exciting opening on the Chicagoland dining scene.

Michelin-starred Yūgen Set To Close After Two and Half Years

Though it managed to hold its own despite the rash of publicity that stemmed from the restaurant that previously occupied the space, Yūgen is probably best known to those on the Chicago dining scene as the restaurant that replaced much lauded Curtis Duffy helmed Grace restaurant. Now after two and half years led by Executive Chef & Pastry Chef Mari Katsumura, its closing its doors with last day of service for the restaurant tentatively planned for Saturday, May 29. The West Loop restaurant, built around Chef Katsumura and a female-led team, debuted in November 2018 with an exciting albeit very  pricey $215/pp tasting menu, earning a Michelin star within the first year. According to a release, “creation continues for the executive team as plans are in the works for a new establishment which will once again be second to none.” 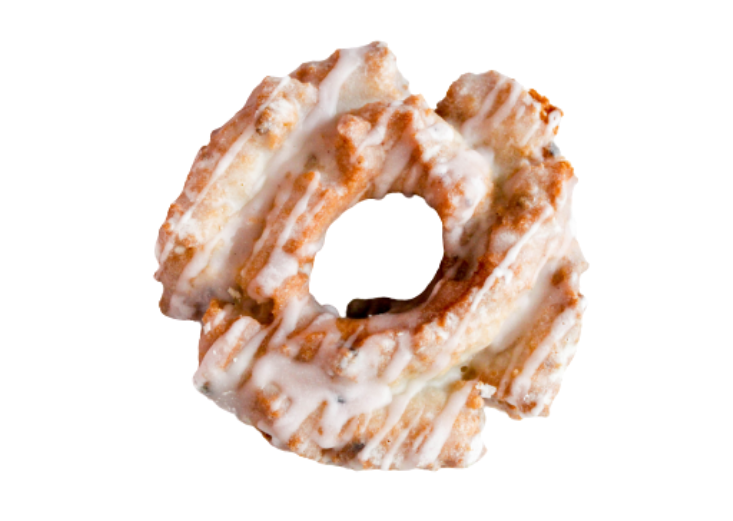 Stan’s Donuts & Coffee is celebrating National Donut Day on June 4 by offering guests free(ish) donuts. When you make a purchase at any of Stans Chicagoland locations, you’ll receive a free glazed cake donut ONLY on June 4. Since its first Chicago shop which opened in 2014 in Wicker Park by way of Labriola bakery’s Rich Labriola California partnership, Stans Donuts has gone on to open 14 shops around the city and suburbs with a new location in Hyde Park set to open mid June 2021.

The battle for domination in the chicken sandwich department has just gotten another iconic Chicago restaurant dropping its own sammie, with a Chicago zing, in the ring. Portillo’s, known for its  juicy Italian Beef sandwiches, chocolate cake, debuted its own Spicy Chicken Sandwich at all its national locations. The Portillo’s Spicey Chicken sandwich, served on a toasted brioche bun with tomato, lettuce get’s its Chicago kick from their new creamy Hot Giardiniera Sauce! The sauce that comes on the Portillo’s Chicken Spicy sandwich is also available on the side to bring the heat to more than just the sandwich – it can be used as a dipping sauce for chicken tenders, fries, onion rings and more; Love the sandwich but love the hot giardiniera sauce even more? The limited-edition bottles can be purchased for $5.99 each at your local Portillo’s restaurant. The restaurant is also launching a marketing campaign around the new spicey chicken sandwich and hot giardiniera sauce by partnering with Chicago based Cameo and some of its celebrities attempting to pronounce the word giardiniera (jar-din-air-ah). 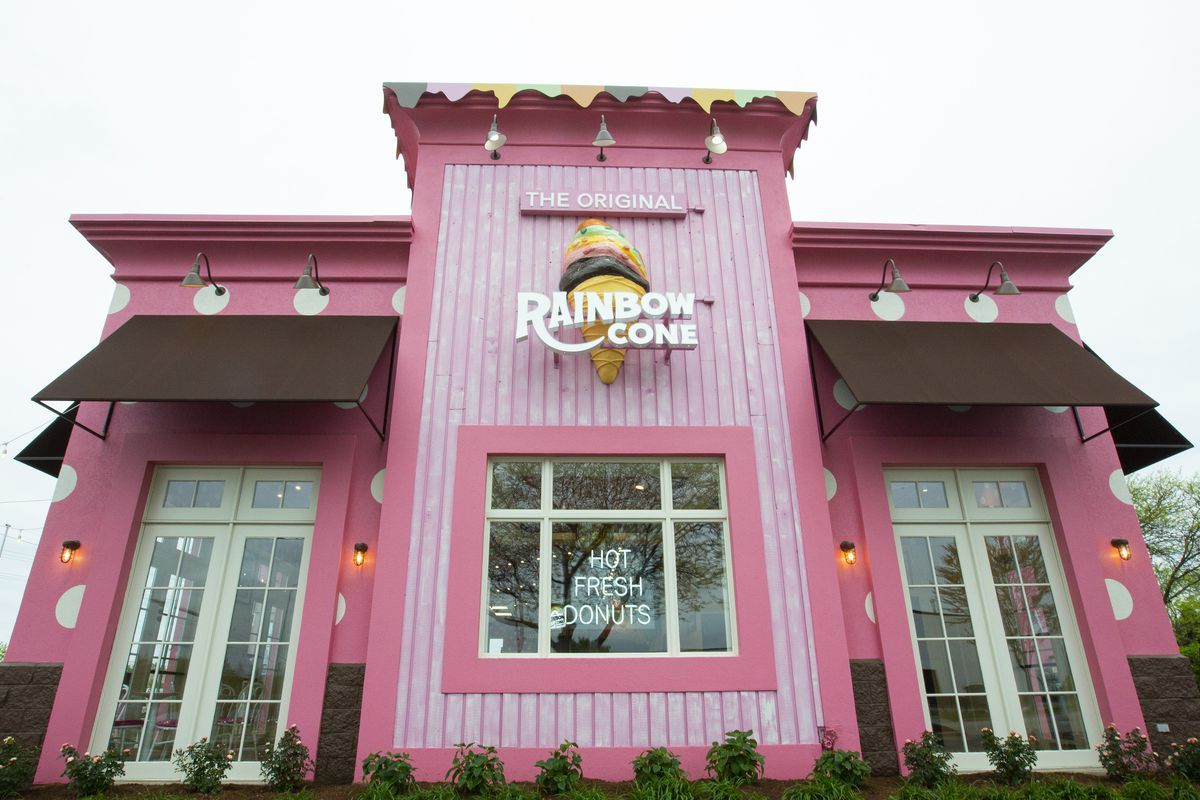 Famed Chicago institution and Instagram fave Original Rainbow Cone held a ribbon cutting on May 5 for its second stand alone brick-mortar location. The new spot that will also have a drive thru is located in….Lombard (498 E Roosevelt Road, Lombard IL 60148).
The Lombard location will feature Rainbow Cone’s vibrant colors in the interior, creating a welcoming space for friends and family to gather. The exterior will consist of pink and white polka dots, allowing the brand to pop-out amongst its neighbors. The space will have an occupancy of 50 patrons indoors and feature an expansive patio also a drive-thru, which is the first of its kind for Rainbow Cone. All menu items will be available for purchase at the drive-thru, including the one of a kind sliced Rainbow Cone and other signature ice cream flavors including Black Walnut, Butter Pecan, New York Vanilla, Cookie Dough, Cookies and Cream, Chocolate Peanut Butter, Bubble Gum, and Mint Flake. Guests can indulge in specialty items only available at the Lombard location, including mini donuts and Rainbow Mixers, where guests can blend mix-ins with Rainbow Cone’s signature soft-serve. Can’t make it to Lombard or the Original Rainbow Cone location in Beverly (9233 S Western Avenue 60643), they also have a shop now open for the season at Navy Pier or catch the Rainbow Cone truck.

Love your edibles? Dispensary33, the first medical cannabis dispensary to open in Chicago, has now opened a recreational ONLY shop (1152 W. Randolph St.) in addition to their medical & recreational dispensary in Andersonville. Recreational cannabis consumption, is now legal in the state of Illinois as of January 2020.

Want to keep up with our latest coverage of all things lifestyle in Chicago and beyond? Click here to get this and more scene worthy items delivered to your inbox.