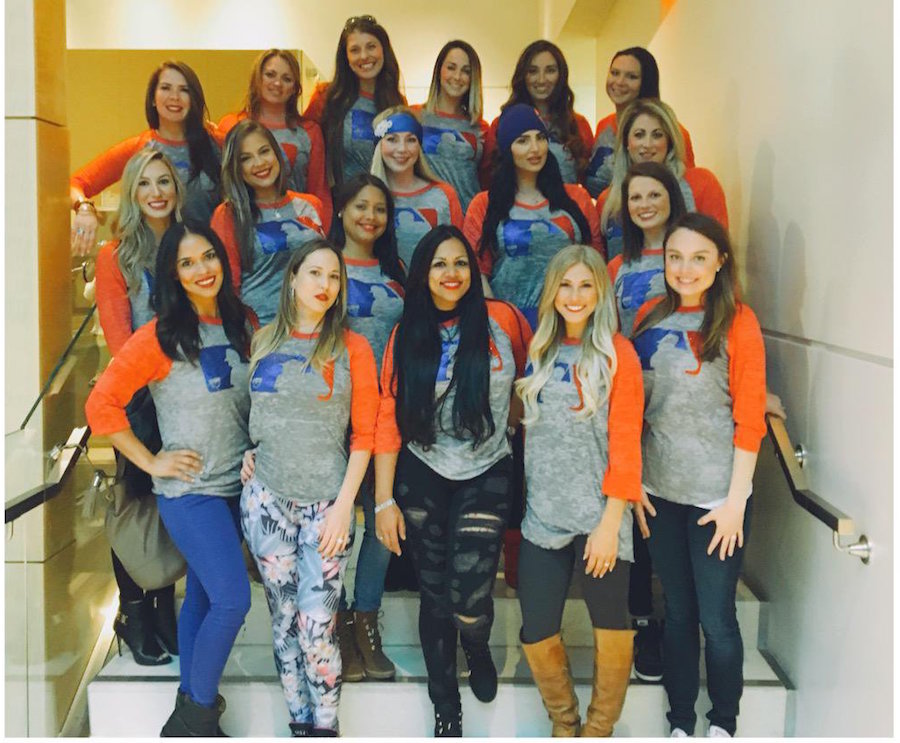 Could 2016 be the year the Curse of the Billygoat is broken? Chicago Cubs fans certainly hope so. The Cubs are having an out-of-the-park season so far —remaining 1st in National League Central for the first time since 1945, and making All-Star history by becoming just the second team ever to have its entire infield start an All-Star Game.

The energy around Wrigleyville has been more electrified than ever, with hopes of securing the World Series for the first time in 108 years. With all the fanfare and attention surrounding the players, so too comes an interest in those who support the players both on and off the diamond, the WAGs (Wives and Girlfriends). on July 16 Cubs Charities will host, ‘Cubs Wives Present Players’ Favorite Things Baskets.’

Though these WAGs induce envy from female fans, their duties range from managing their own careers, organizing charity events and fundraisers, taking care of the kids and home, to continuously supporting their men on the field. 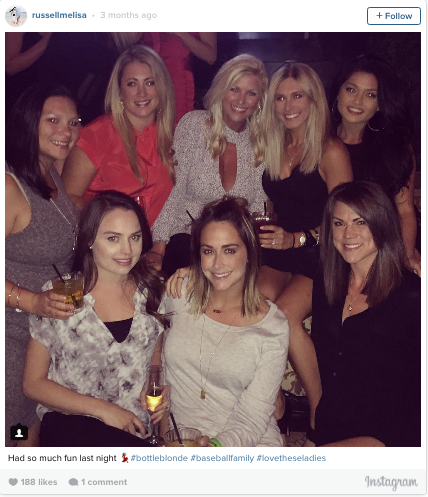 Check out the roster of some of the team’s most notable counterparts: 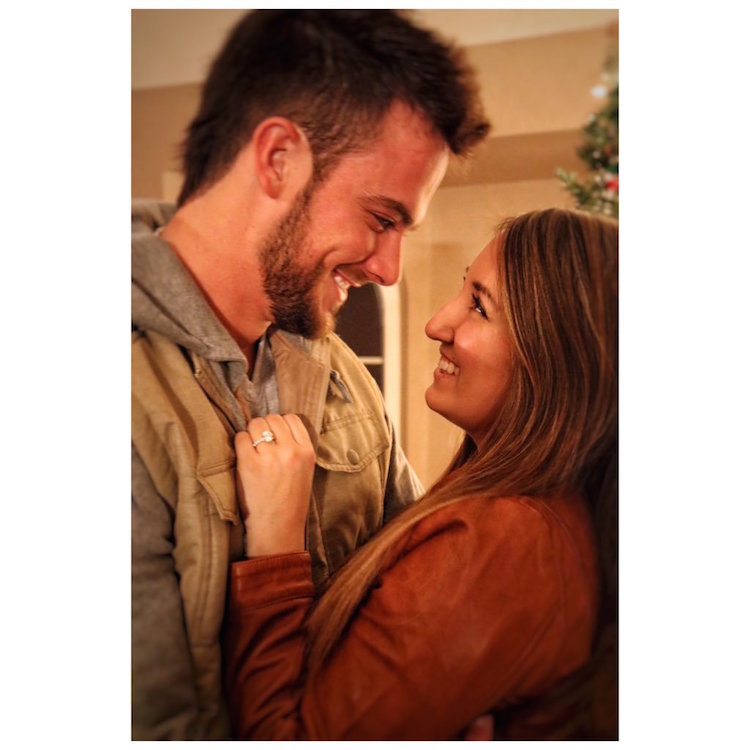 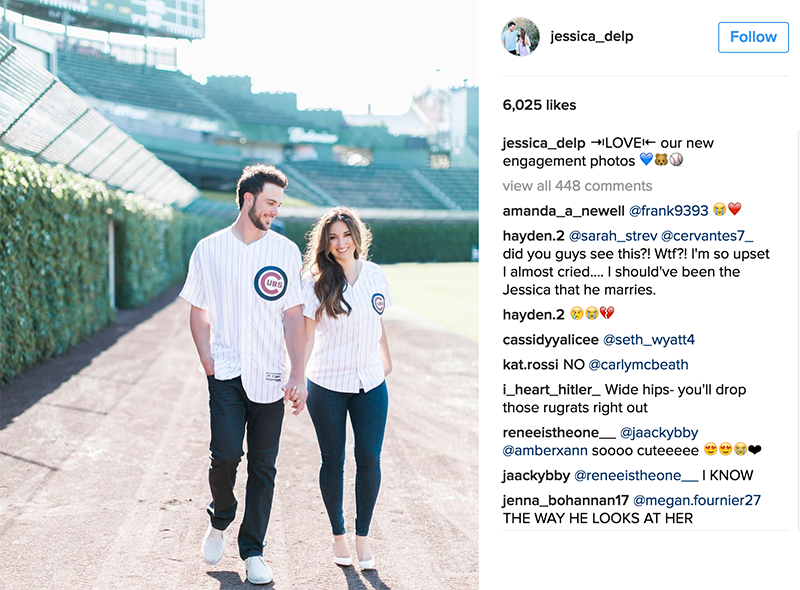 A new addition to join the Cubs’ WAGs is Julianna (31), wife of Ben Zobrist and a successful Christian music singer. They got married in 2005 after meeting via Instant Messenger and are parents to three kids. 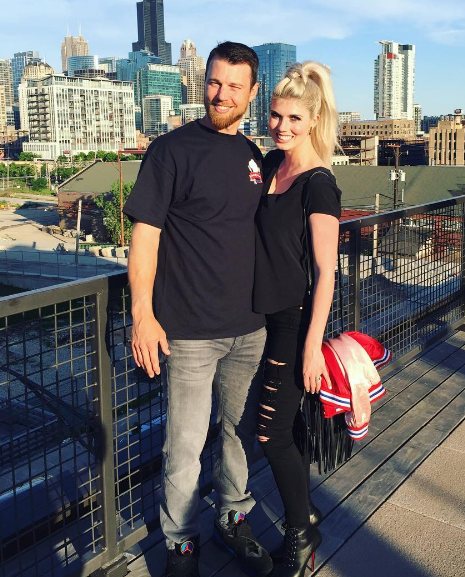 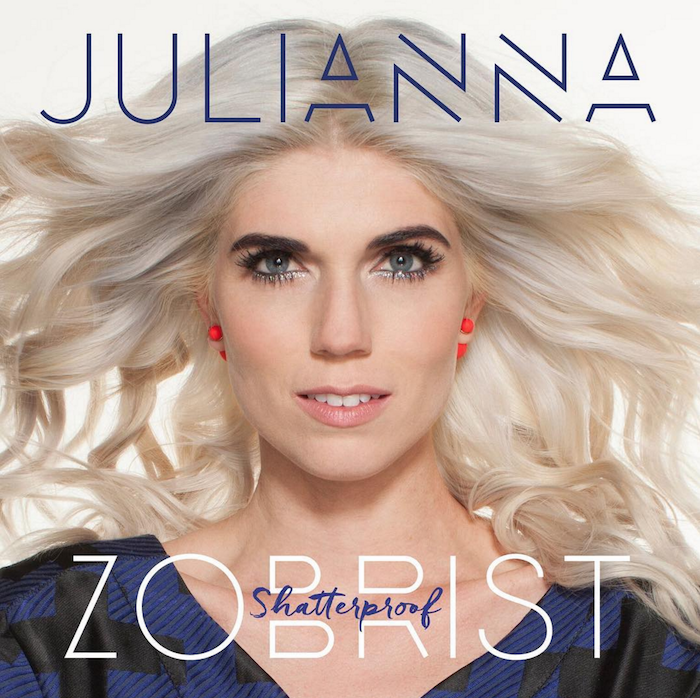 Elissa Hammel has been married to pitcher Jason Hammel since 2009 after meeting in 2006, they have two kids together. 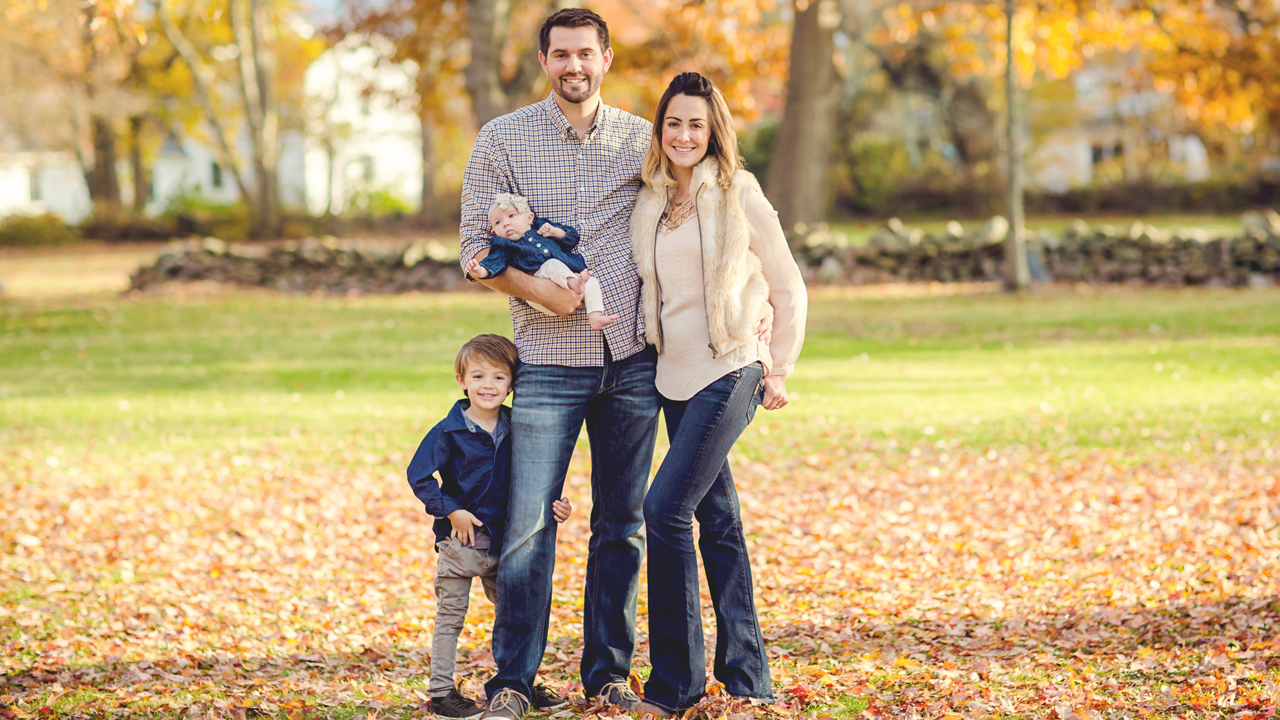 Cubs shortstop Addison Russell’s married Melisa (nee Reidy) in early January 2016 is regarded as one of the most eye-catching WAGs on the team. They welcomed their first child together in September 2015. 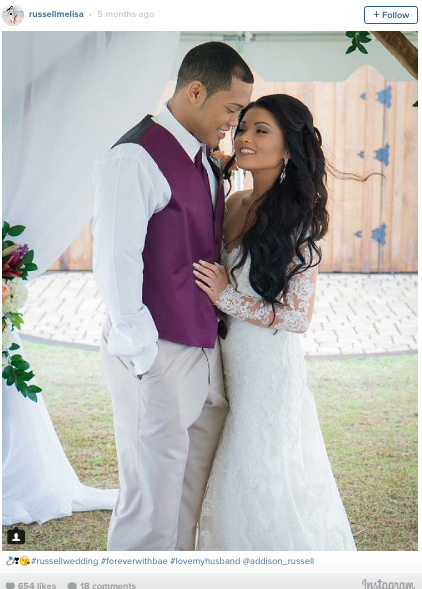 Darya Aliya Fowler The wife of centerfielder Dexter Fowler and mommy to their daughter Naya shows support for her husband both on and off the field. Her instagram feed is filled with cuteness courtesy of their daughter Naya. The couple met in Vegas in 2010 and they were married din 2012. She’s trusts her tresses to the amazing Todd Kempton so she’s so bae status to us. 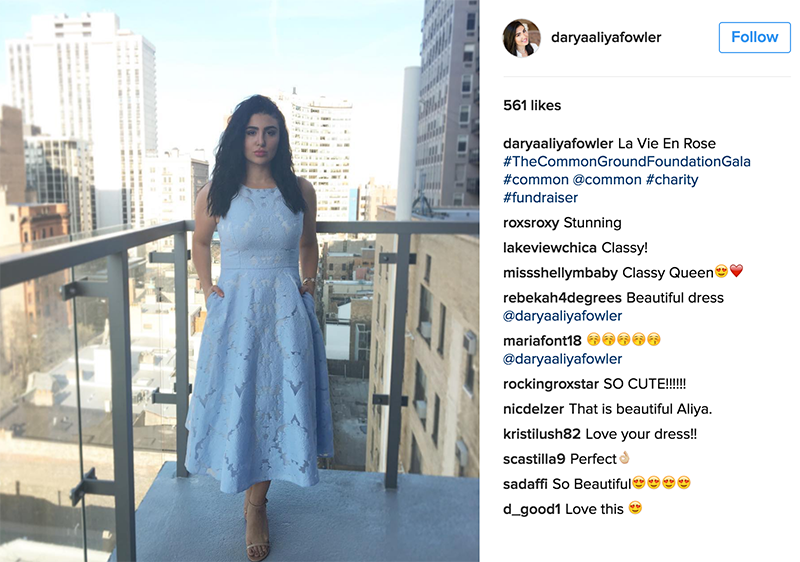 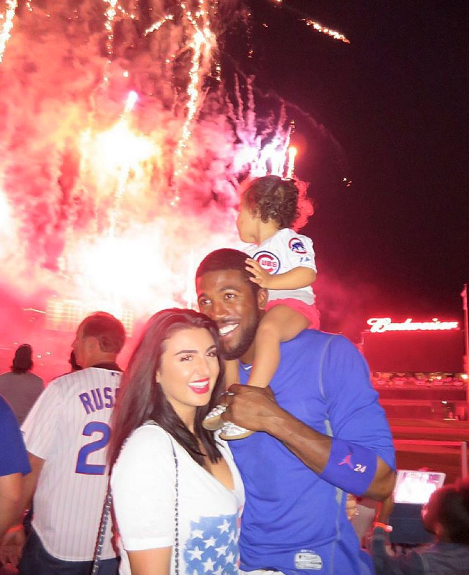 I Couldn’t possibly ask God for anything more. He is so great. My little and big angels #nayafowler A photo posted by Darya Aliya Fowler (@daryaaliyafowler) on May 8, 2016 at 6:14pm PDT 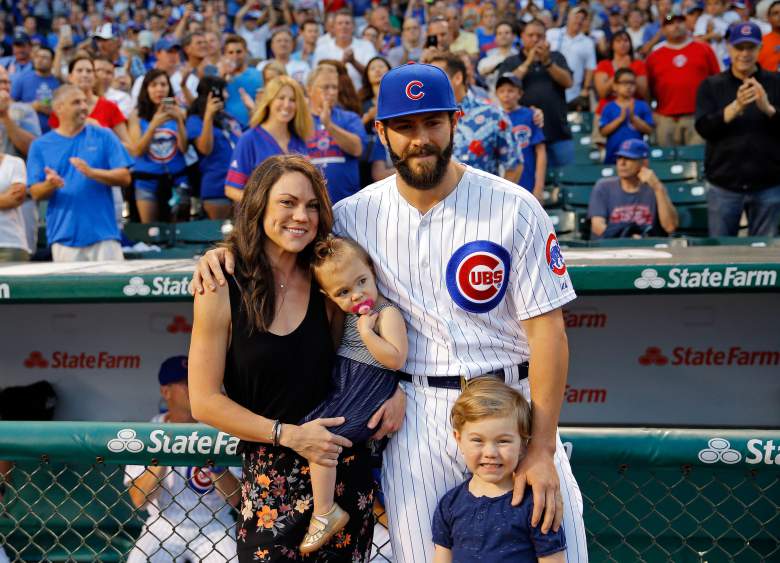 They met in elementary school and began dating as juniors in high school. Wife of Jake Arrieta, Brittany, actively supports her husband both from the stands, and on social media. We get a sense she might be the mama cub of the WAGS crew. 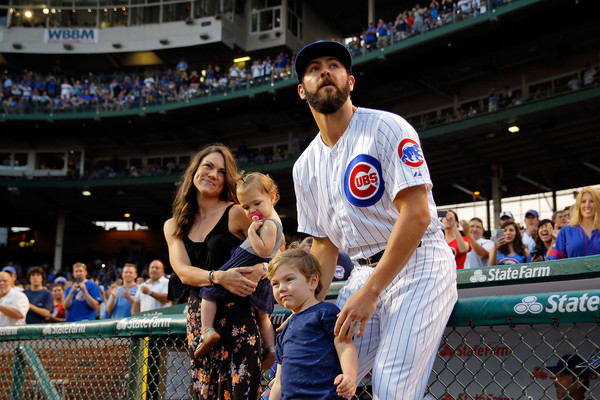 Jessica and her husband Trevor, pitcher for the Cubs, are active supporters of animal rights. They welcomed their first child together in February of this year, on the first day of spring training. They live out in Arizona so she doesn’t do much with the Chicago based WAGS. 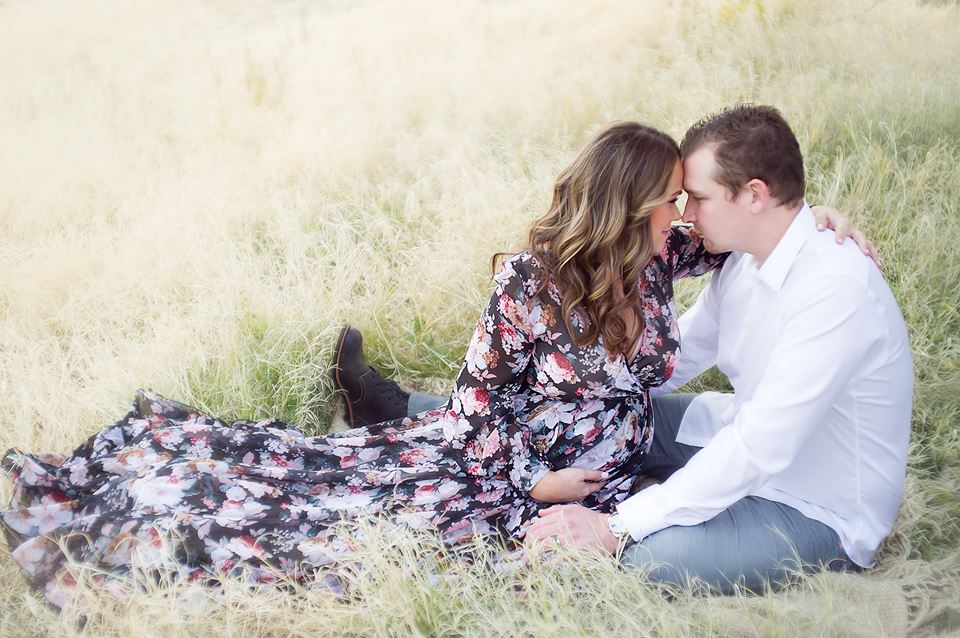 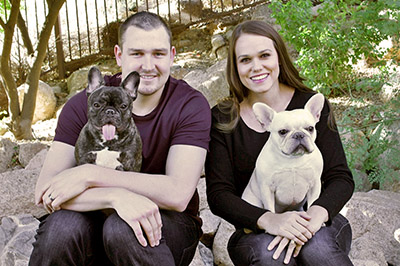 The wife of outfielder Matt Szczur, Natalie has a blog dedicated to sharing their life off the field. 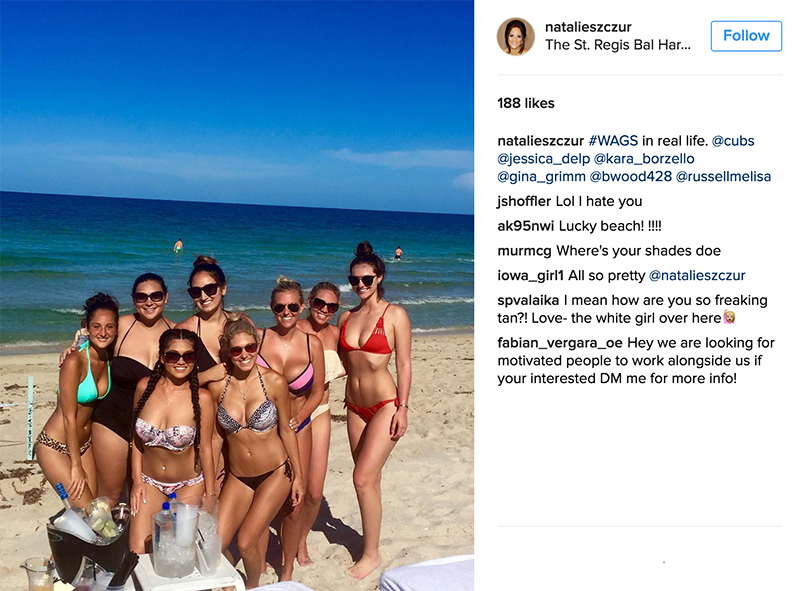 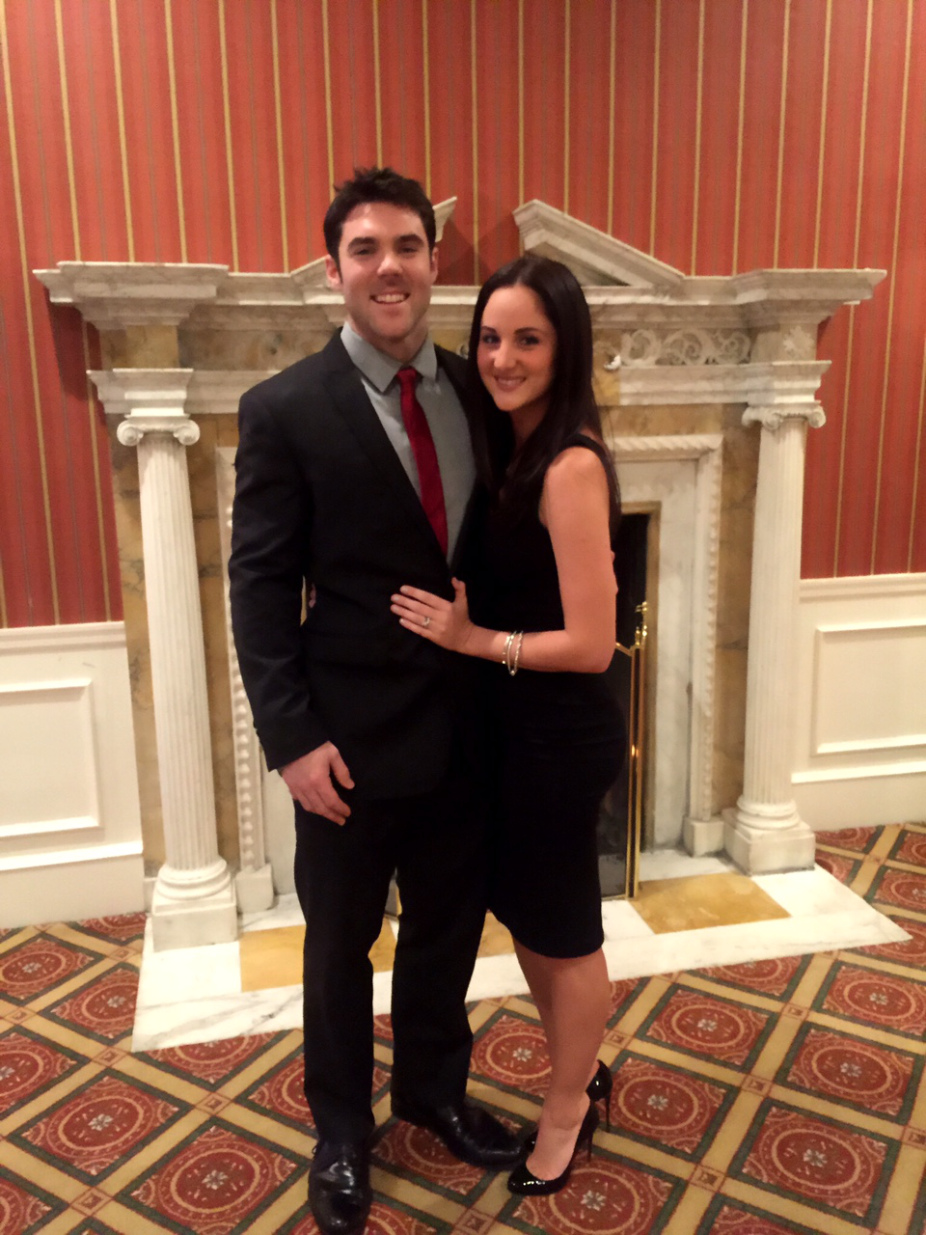 Awesome night supporting the @anthony_rizzo_familyfoundation at the Fourth Annual Cook-Off for Cancer with my dreamboat @superszcz4. #letsgive #letsgo #gocubsgo @cubs

The girlfriend of Kyle Schwarber is actively involved in Chicago’s philanthropy community. Her social media cubs postings have been limited due to Kyle’s injury. 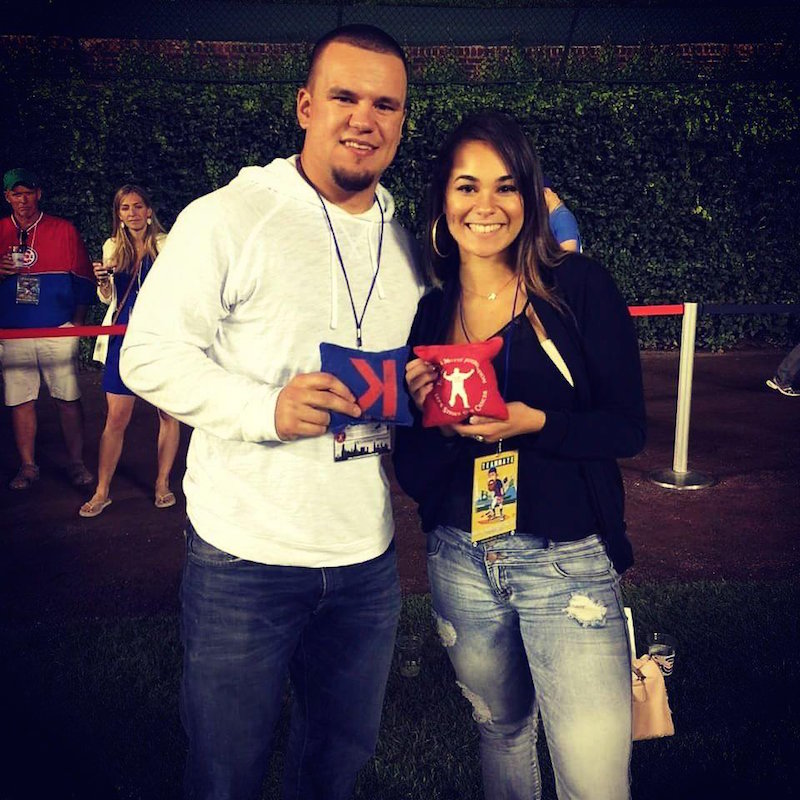 Despite being married to Tommy Hunter since 2014, Ellen hasn’t changed her name. 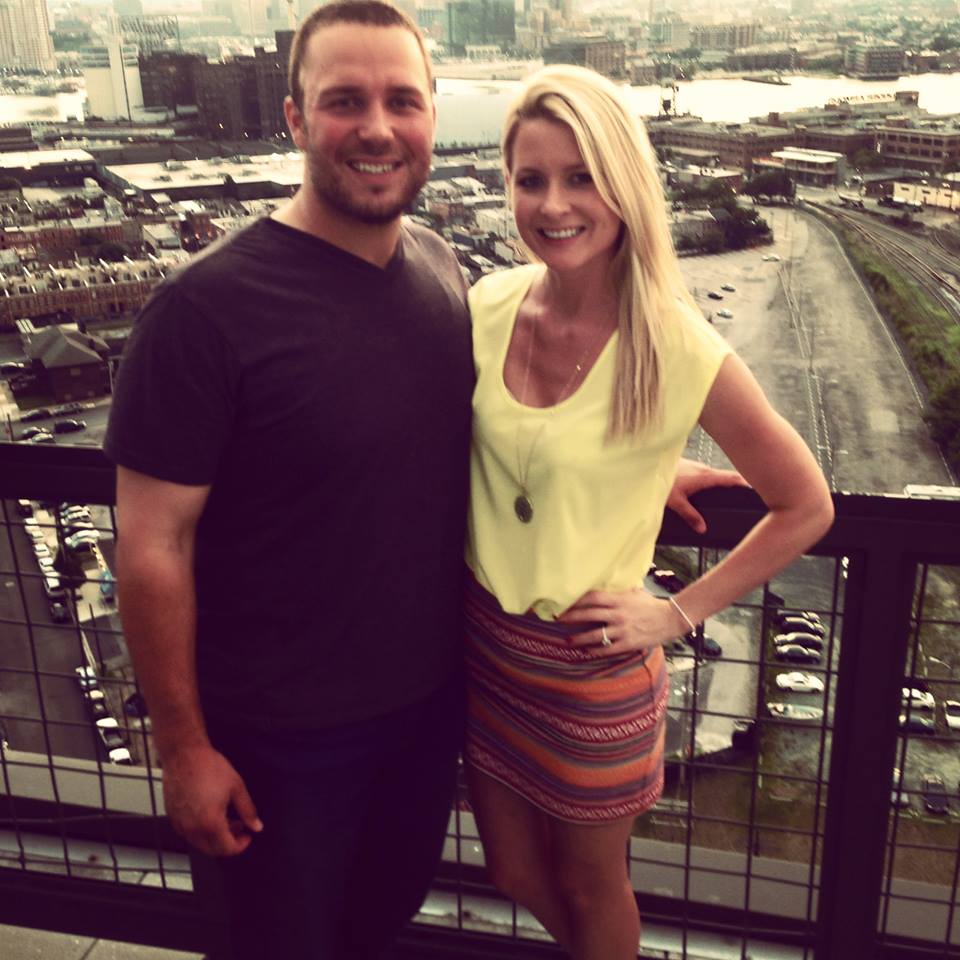 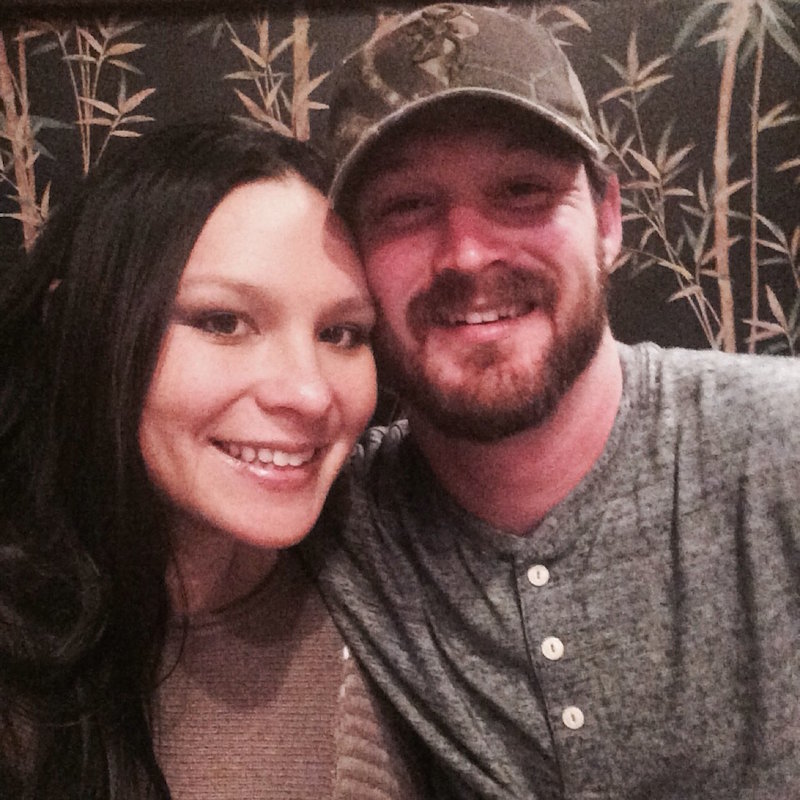 Gina Grimm is the wife of Justin Grimm, Cubs pitcher. Gina (Nee Nuccio) is a Naperville native and former gymnast at University of Georgia. They were married in February 2016 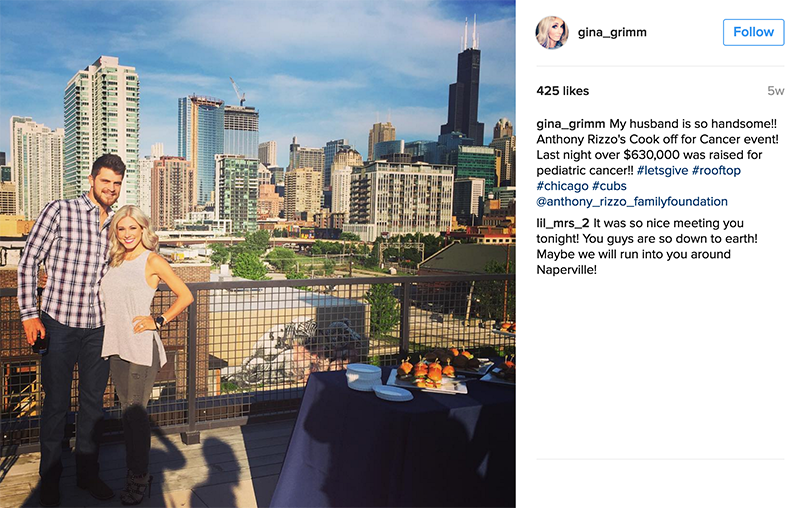 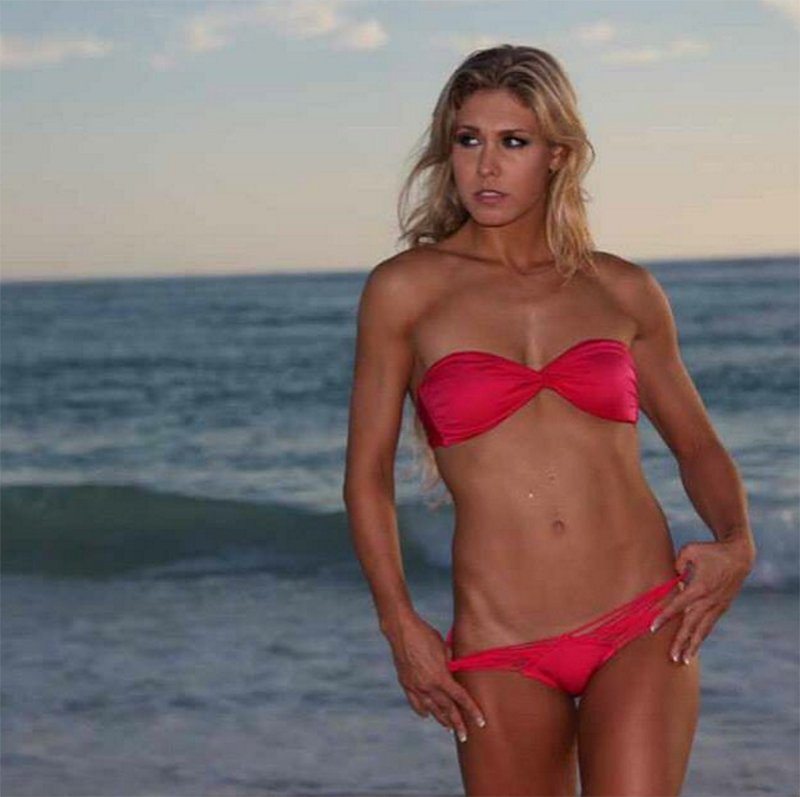 Words can’t express how thankful @jgrimm52 and I are of everyone who made our special day so special!!!! What an amazing day!! Poor Justin burnt his finger ? #GrimmWedding! #january30th2016 @littleartist11 A photo posted by Gina Grimm (Nuccio) (@gina_grimm) on Jan 31, 2016 at 6:53pm PST

Emma Cain and Kyle Hendricks got engaged in February 2016. She graduated with a BSN. 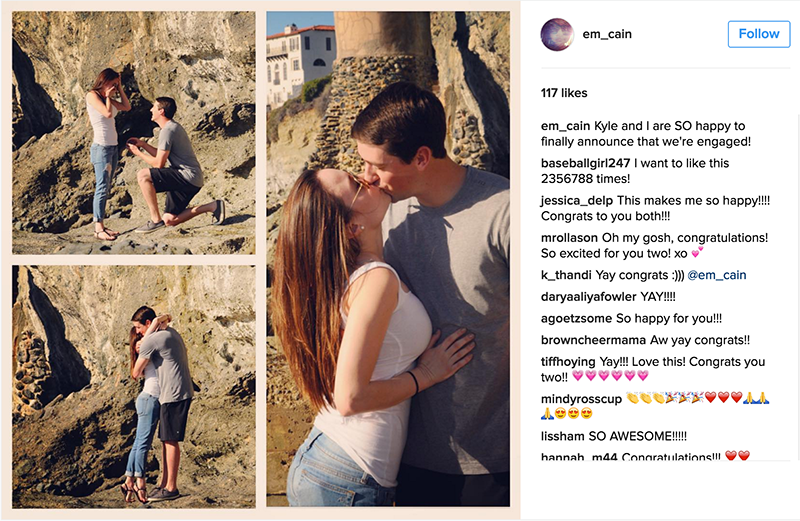 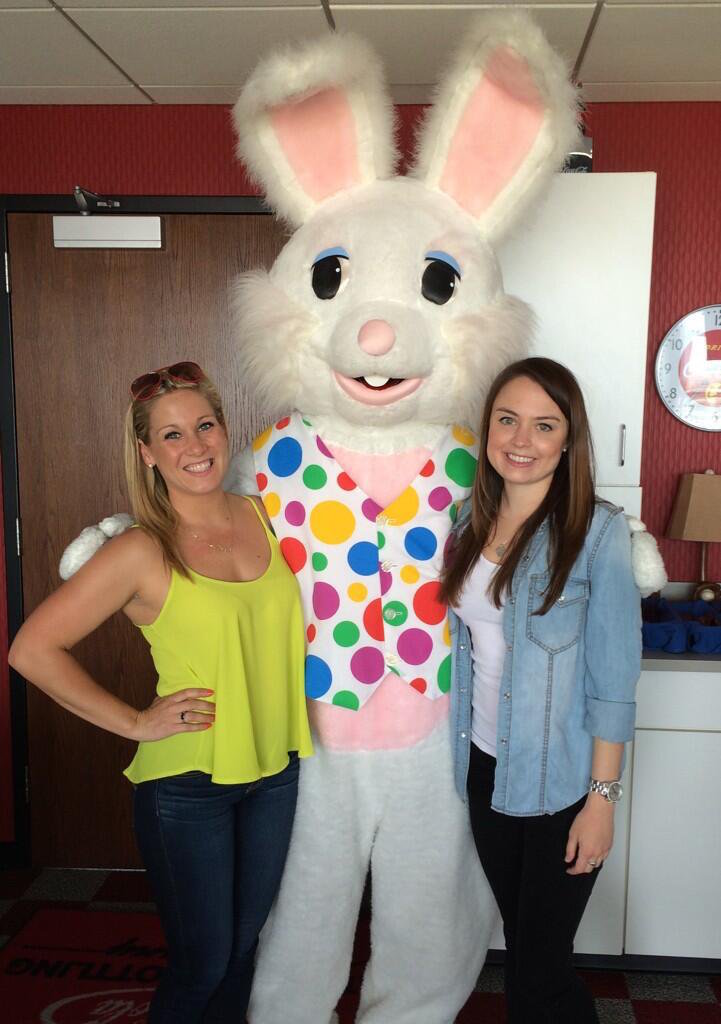 The former high school sweethearts married in 2014 in Texas. 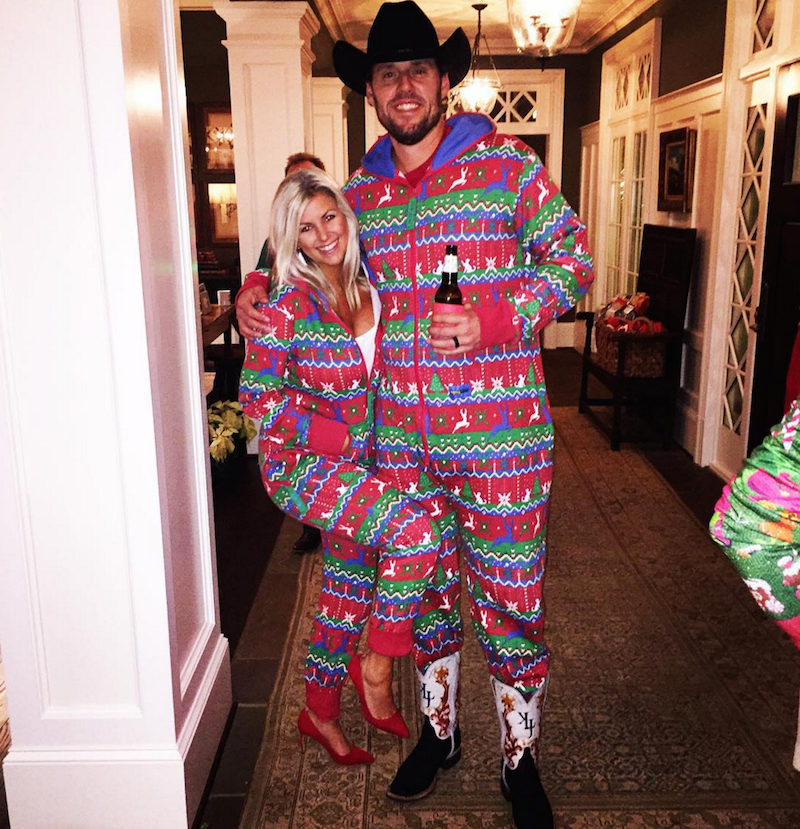 Miami fun with these beauties!! 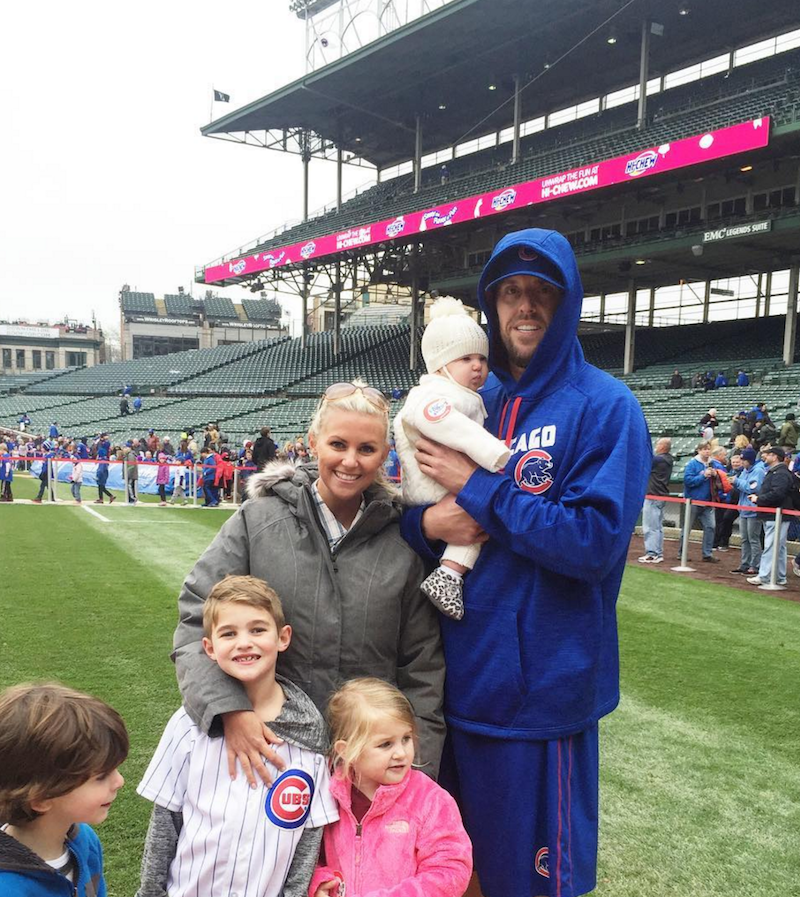 We wouldn’t forget about Anthony Rizzo but it seems he’s moved on from his rumored former flame Chelsea Smith and now dating Ms. Vakos for about 5 months now. He recently started sharing photos of their outings together. She’s an Arizona State alum who was a nutritional intern with the Cubs in February 2016, so maybe that’s how they met. 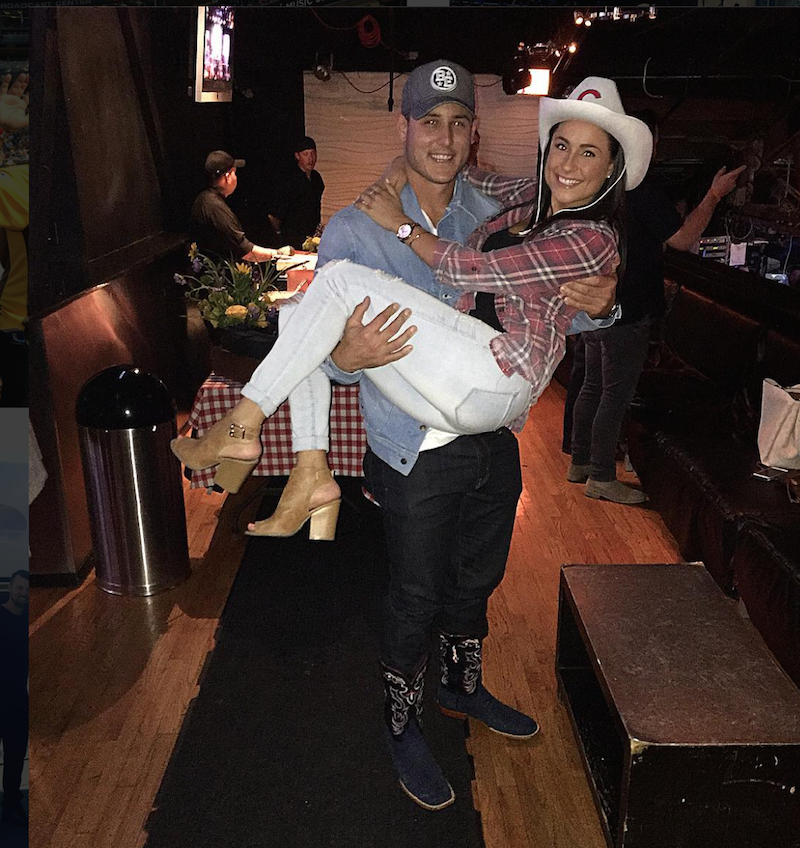 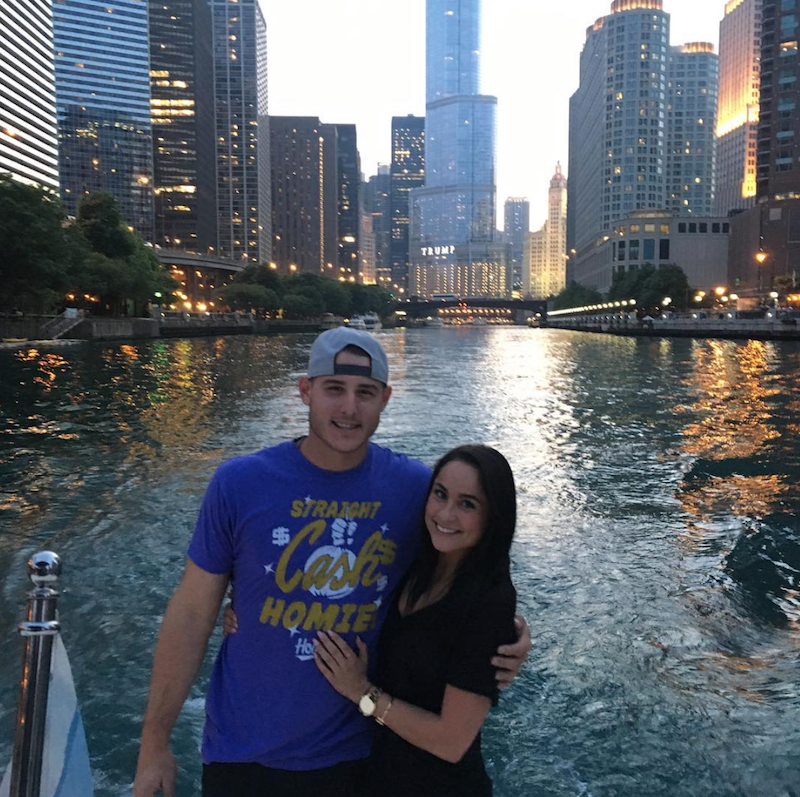 Which WAG are you rooting for? Go Cubs Go!