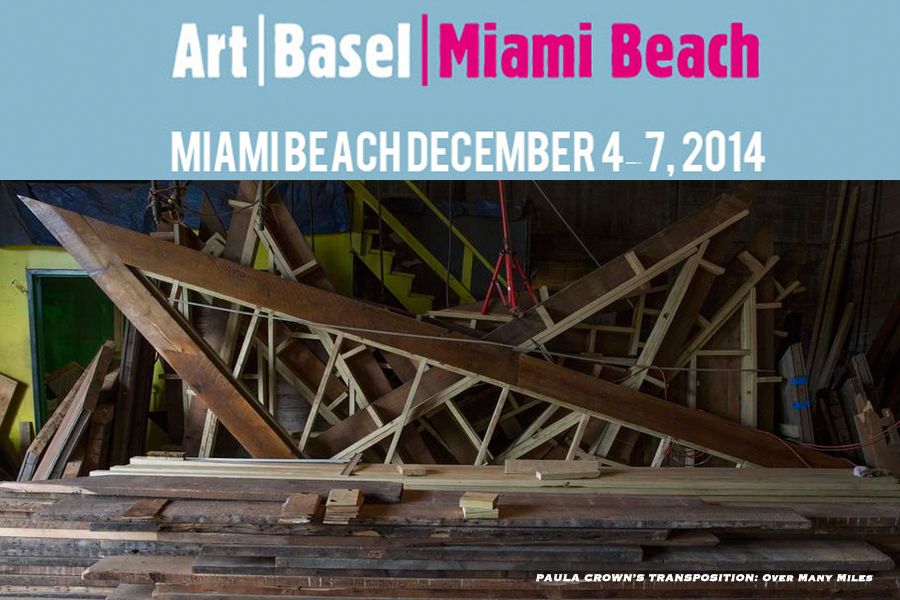 Hotness In The News Tuesday Dec. 2

It’s that time of year again, when partiers, collectors, gallerists all decamp to Miami Beach for a week filled with parties, parties, parties, art, fancy dinners with celebs and people watching.
From New Yorks media elite and who’s who social set to hot Brazilian collectors and all in between, it will be a week filled with fun. Though Art Basel Miami Beach is the contemporary art nexus for the art fair in North America which sees a good amount of people from New York and South America, a good amount of Chicagoans do head down for the week(end) and this year several Chicago affiliated artists are being celebrated.

Paula Crown who splits time between Chicago and Aspen will debut her public installation called Transposition: Over Many Miles which was done in collaboration with Theaster Gates and Jeanne Gang’s studio Gang.

Speaking of Studio Gang, it was recently announced that they will be designing a condo building in Miami’s Design District(think of the district as a mashup of Merchandise Mart and Oak Street but with more luxury brands).

Master Hotelier Ian Schrager of Chicago’s own PUBLIC Hotels, who paved the way for luxe Miami hotel  when opening the Delano has returned but this time its through his partnership with Marriott and they are opening Miami Beach EDITION (Luxury hotel and residences). There are lots of events already planned for the week at the hotspot. Another Chicago connection to the hotel? Cynthia Rowley’s husband Bill Powers has been tapped to oversee art programming for the property.

SAIC will once again host their annual alumni party and this year they are partnering with EXPO Chicago for the invite only party Friday evening.

Also new this year, Art Basel launched the Crowdfunding Initiative on September 12, 2014 in partnership with Kickstarter to support non-profit visual arts organizations. Since the launch, almost $170,000 has been raised by 935 backers through the initiative.

The artist who will be talk  of the week will be Peter Marino, Daniel Arsham, and Kris Knight.  One will be feted at Locust Project, Gucci pop up respectively.

At the  Faena Hotel Miami Beach which is still under construction,  Alan Faena and Len Blavatnik will host along  with Rem Koolhaas, OMA and Studio Job a private Argentine asado lunch with chef Francis Mallman. There will also be a site-specific installation by Gonzalo Fuenmayor and Studio Job.

The art is of course why everyone decamps to Miami, “am I right?”.  In addition to the main attraction Art Basel Miami beach 2014 taking place at the Miami Convention Center, several other fairs and satelite fairs are also taking place.

SCOPE is back this year with Kasseem “Swizz Beatz” Dean’s Dean Collection. They will host their VIP Brunch benefiting the Mourning Family Foundation on Tuesday.

Tim Burton’s new film Big Eyes headlines the AB/MB film program with a special screening on December 5th, 8:30 p.m., at the Colony Theatre on Lincoln Road.  It’s the story of Walter Keane, the mysterious painter of waifs with “big eyes,” who’s works turned out to have actually been made by his wife Margaret (played by Amy Adams). The screening is free, but get there super early.

–WHAT: LAND AND PADDLE8 INVITE YOU TO THE LAND 5TH YEAR GALA at the Raleigh Hotel
Where
Time:
Invitation Only?No but tickets required. Individual Tickets: $350 Click here to purchase| Artist Tickets: $250 | After Party Ticket: $100
Join us from 9-11 for cocktails and dancing! Click here to purchase
Auction live on Paddle8 through December 1st at 10pm EST. Live auction at the event at 9pm EST by Alexander Gilkes, with silent auction of works on-site until 10pm EST.

–WHAT: Gucci is kicking off its presentation of “Smell The Magic,” an exhibit by Toronto-based artist Kris Knight
Where Spinello pop-up in the Design District (95 Northeast 40th Street, Miami)
Time: 7PM
Invitation Only? Yes but chance of entry is at 90%

–WHAT: Solange Knowles will curate a selection of performances by feature artists on her label for the duration of SELECT Art Fair 2014.
Where
Time:
Invitation Only? Performances at will happen nightly from 7 – 10 pm on weekdays and 7 – 11 pm on the weekend.All performances at SELECT are FREE and open to the public.

-Chrome Hearts Opening. With live performance by Zoe Kravitz of Lolawolf and DJ set by Atlanta de Cadenet. Chrome Hearts, 4025 NE Second Ave., Miami. Event is from 7:30 to 10:30 p.m. By invitation only.

-Russell and Danny Simmons celebrate the 5th anniversary of their “Artisan Series” with a big party for the 2014 finalists and winner — and a special performance by Miguel — at Soho Beach House (4385 Collins Avenue, Miami Beach)

-Jeremy Scott and Moschino are having a party with Barbie on December 4th, 9 p.m. to midnight, at the Thompson Miami Beach

See Also
LIFESTYLE, Things to do

-Hunter & Gatti’s new ‘I Will Make You A Star’ exhibition that includes a selection of Hunter & Gatti’s overpainted celebrity portraits, including Pharrell Williams, Diane Kruger, Bruno Mars, Elizabeth Olsen, Carolyn Murphy, Ziyi Zhang, Lewis Hamilton, Leigh Lezark and Jamie Dornan, among others will be celebrated at Katsuya at SLS South Beach. The exhibit is  inspired by the neo-expressionism of Jean-Michel Basquiat and explores the limits of popular culture, reflecting it’s ongoing interest in the art world.

-Alchemist shop on level 5 of the Herzog & De Meuron-designed parking garage on Lincoln Road, is set to top last year’s cool Colette collab with a week-long installation called “AIRBALL.”  They are installing a “basketball arcade” designed by Snarkitecture, where you can shoot some hoops or just chill to DJs and shop for new collabs from Rick Owens, Del Toro, Rochambeau and more.  Alchemist and Snarkitecture host an “AIRBALL” party at the Delano on Friday, December 5th, with a performance by Travis Scott, along with a DJ set from Virgil Abloh. (Supermodel Erin Wasson will host a private event in the store right before the big party at the Delano on Friday.)

-Questlove will haev his friends  over to a private home in Miami on December 6th for a “Food Salon” with three chefs — Daniel Patterson, Dave Beran of Next Restaurant in Chicago and Christina Tosi — who will each prepare one dish. The lucky attendees will eat, relax and “discuss art, commerce, and the balance of it all.”

Lagos Photo, an annual photography festival in Nigeria is seeking funding to create a year-round program of exhibitions and workshops. (Campaign to launch week of December 1)

Hotness In the News Monday Dec. 1

Hotness In The News Tuesday Dec. 2