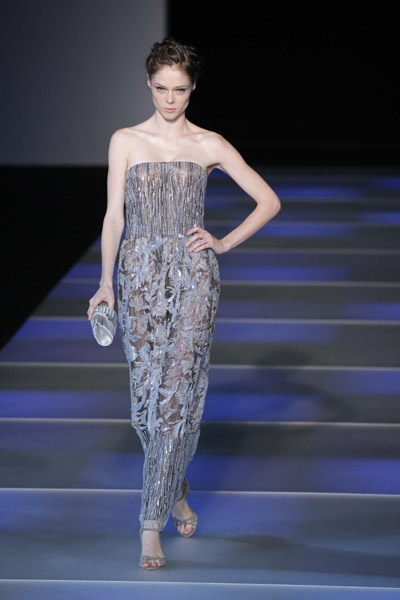 If you’ve never met Shameless star Shanola Hampton in person, you may think that some of the mannerisms of her character Vee on the show Shameless is not who she is in real life but minutes after meeting her you will realize she is just as delightful as a home made peach cobbler. She arrived  in Louboutin pumps with gold heels and wearing a resplendent body hugging dress that you couldn’t even tell she just gave birth three and a half months prior.  Her energy is so infectious and her smile inviting. She was at the AT&T Michigan Avenue flagship store for their Shameless and Sophisticed event which featured chef Richie Farina creating dishes inspired by the show Shameless. We chatted about her love for food (a lot!), filming in Chicago and her favorite food spots and what we can expect from season 7 of Shameless (can you believe). Shameless fans get a treat of 2 seasons in one calendar year as the show will return to Showtime  Oct. 2. 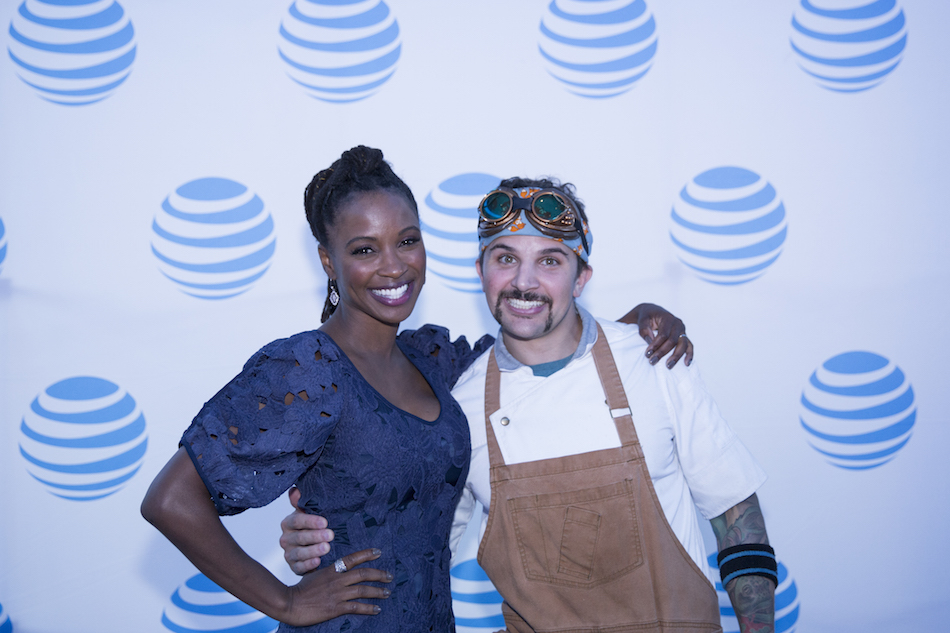 SociaLifeChicago: This event is around food and cooking do you cook or take out?
Shanola Hampton: I do cook but I am not much of a take out-er as I am a Trader Joes-er. I’m from the south and I make Sunday dinner which is amazing. I make Macaroni and cheese (Baked), stuffing and cornbread.

SLC: I know you and your castmates enjoy going out while filming in Chicago, what are your favorite spots?
SH: Prime & Provisions is our favorite spot! But let’s be clear, Portillos is my joint, I eat there daily! The croissant beef and cheddar sandwich, the french fries and wait for it…The chocolate cake!!!! It’s the joint. Most of the time my castmates will ask if I’ve been to Portillos that day. We also do Lou Malnati’s, but yea I love to eat. Which is why I am excited about this event at the AT&T store. I can’t wait to eat Rich’s food and I heard we are going to have mac and cheese. Someone said to me you are collaborating with a chef? It’s perfect! I used to live here because I went to grad school at the University of Illinois and I worked at Goose Island brewery in Wrigleyville but now I don’t remember all the hot spots. 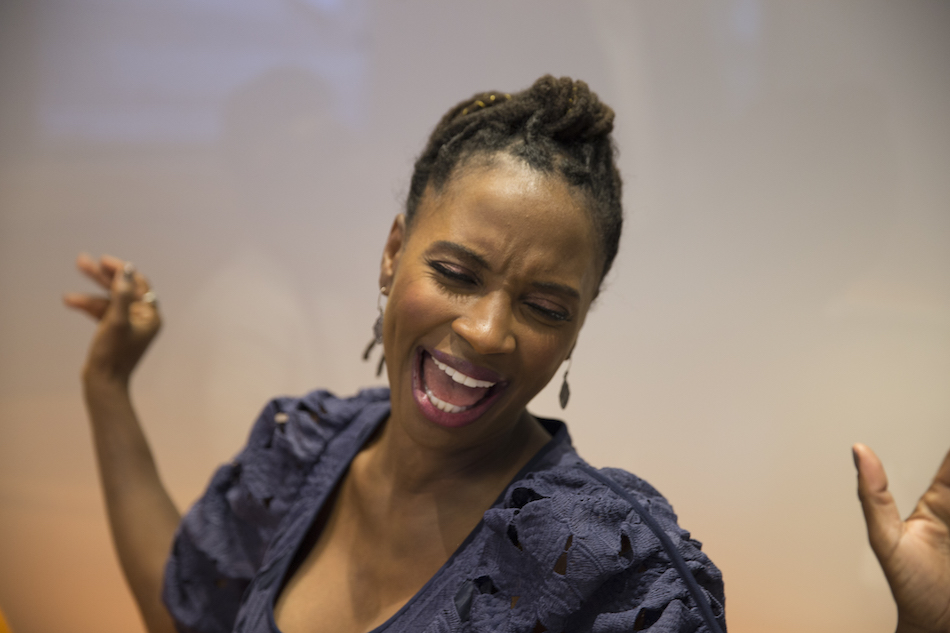 SLC: Season 7 is about to start, what are some things viewers can look forward to this season?
SH: It’s interesting when you’ve been on a show for seven seasons, you’ve gotten to grow with these characters and see everybody evolve; watch the children go from nine to 17. Now Debbie has a baby and you can look forward to how she handles motherhood which of course will be in a very Shameless fashion. Karl, who’s had a run in with the law, is now coming out of that and wants to make something different of his life and you see his girlfriend Dominique’s father come in and impact his life in a very meaningful way. You get to see Fiona single, which we have NEVER in seven seasons seen. She’s the chronic engager so we get to see her single in a very Shameless way but she is also re-asserting her independence wanting to do something for her.
Frank is still being Frank, but remember, we dumped him in the lake last season, and he’s not too happy about that so we will see him react to that in a very Frank way. Then It’s Veronica, Kevin and Svetlana now. It used to be just Veronica and Kevin, so we are in this Throuple; its this three way marriage and you’ll see what it’s like for Kevin to be married to two women, that dynamic and how they balance it, raise their kids and run a business together.

SLC: If you had to throw a dream dinner party, who would be on your guest list?
SH: Blake Shelton, Barack and Michelle Obama, my husband, my mom and my dad and my granny who is about to be 88 years old. My three sisters, because we are all very very close and Whitney (Houston) and my best friend Vanessa.

SLC: You look amazing! What’s your fitness routine
SH: I workout a lot which allows me to eat whatever I want. I go to the gym, a lot of time its around 4am before my call time. I do a mixture of weights and cardio. Sometimes I take the weights on the cardio machine and get it done in 30 minutes. I do leg lifting. I am also a fan of pilates, I’ve tried yoga but its not my main regimen. Oh and the abs, you have to get them tight! 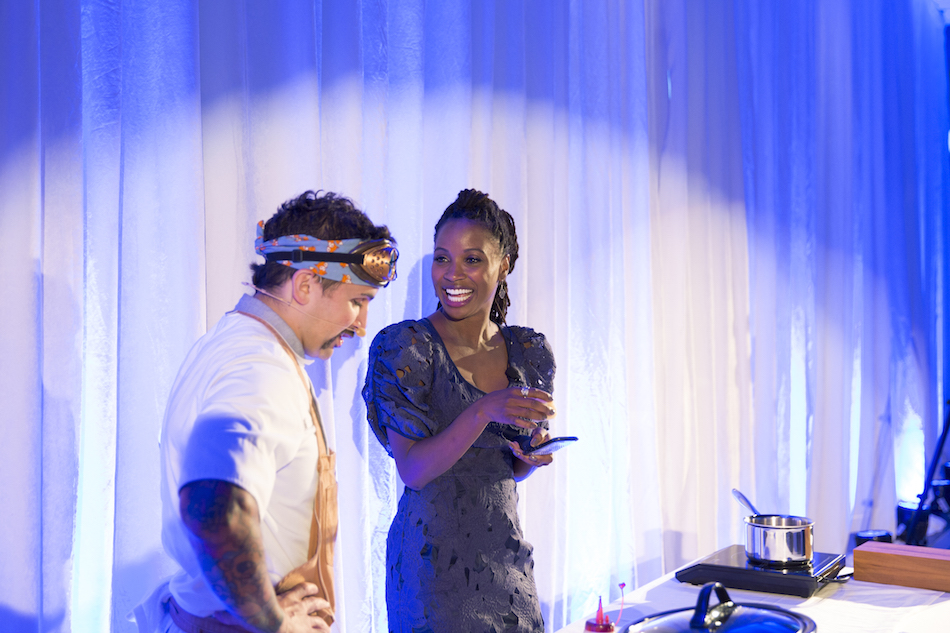 SLC: What advice do you give your single friends that are looking for love?
SH: I’ve been married for 16 years now and we just had kids so I would say wait on the kids. But its hard to give advice because I couldn’t imagine dating in this world as it is right now. I wouldn’t event know where to begin. I guess my advice would be, marry somebody from the south.

Shanola’s mac and cheese ingredients: put eggs, milk, lots and lots of cheese, little bit of sugar (that’s the secret) then you bake it and melt so its more like a casserole and cuts in blocks.

Following our interview, Shanola along with chef Richie Farina, who prepared 5 different dished for the evening interacted with guests between the food demos. The menu included buffalo steak tartare, mac and cheese with quail and béchamel sauce. 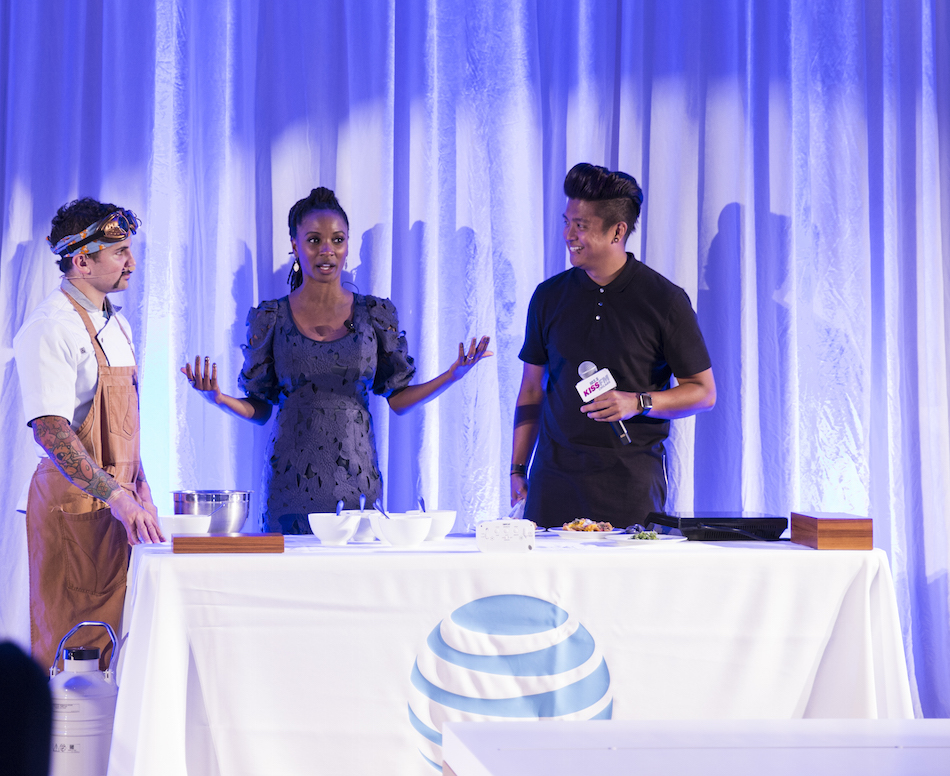 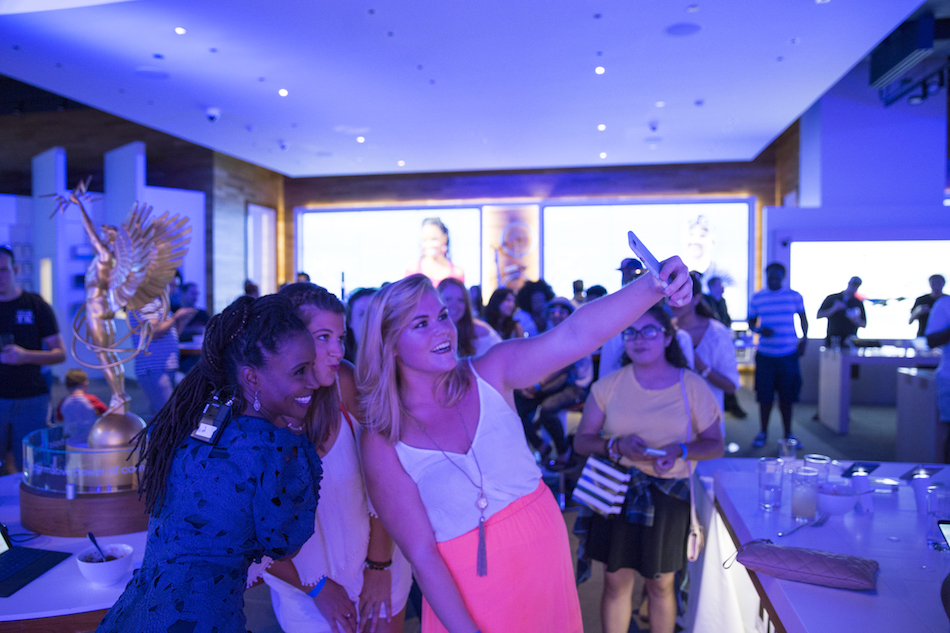 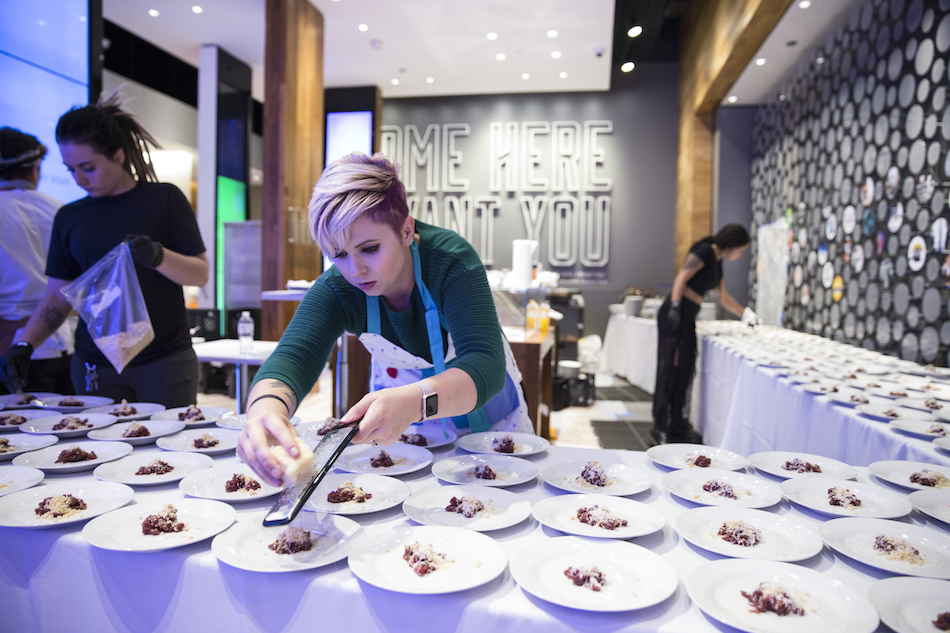