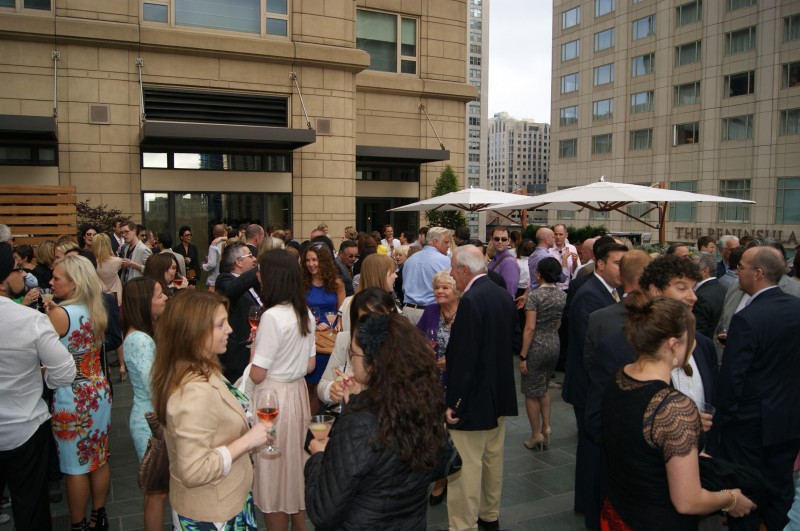 On Wednesday(May 30) Chicago’s established power players and the bright up and coming guys and gals mingled and sipped and the party was so fun most stayed past the “end” of the party. As guests ascended the elevator towards the 7th floor you could see the anticipation in some of their faces. The sun was just the perfect shade of yellow-orange and the grey skies moved away, just for the party of course! Upon walking onto the garden guests were greeted by cheerful J-crew gingham shirt clad NoMI staff offering up a glass of wine, specialty cocktail or appetizer; those barbecued rosemary skewered U-10* shrimp were so delicious and juicy it only took two bites for them to disappear in my mouth(yum!). Chef Adam Noffsinger manned the Jamón ibérico station where he sliced thin succulent pieces of the meat and also managed to give a lesson on it’s origin and how FDA regulations kept this deliciousness from coming stateside in the past. I wish I could tell you all he explained but all I could think of was Jamón ibérico. Park Hyatt Chicago Public Relations Director Lynne Bredfeldt and Park Hyatt General Manager Walter Brindell were the hosts with the most that evening greeting guests at every turn.
Early in the evening I spotted Amy Creyer of ChiStreetstyle and Jenn Lake, VP of Zapwater Communications and as the night progressed and more guests came in, I spotted some other familiar faces. Guests in attendance included: Les Coney, Robin Loewenberg Berger(Magellan Development), Corri McFadden(Shop Edropoff), Kevin Aeh(Time Out Chicago), John Carroll(Modern Luxury), Lindsay Avner (BrightPink), Jay Schuster and Laura Modica(PUBLIC), Chef Kevin Hickey(Four Seasons), Samantha Saifer-Berngard(SKOOG Productions), Debi Lilly(A Perfect Event), Isaiah Freeman-Shub(Modern Luxury), Emma Arnold (Très Awesome).

As I meandered through the garden, I came upon a sweet lady with a magnificent British accent who asked if I was taking pictures for a print publication. Chatting her up a bit she told me this was her and her husband’s  first time in Chicago and she loved Chicago! Her name was Judith Chalmers and upon googling her, found out she’s a big deal journo in England who even had people recognize her while out and about. She is doing a piece on the city and I can’t wait to read it.

Michael Hines, of Mike Hines Signature, did the 300ft floral installation at Park Hyatt was also there and so nice, I didn’t realize it was him until his friend introduced us.

When I attend events I try to take the pictures as guests arrive because that’s usually when they are at their prim-est(is that even a word?) and then I try  to interact a bit before the night is over. The NoMI Garden Q was a great party that every corner you turned guests were meeting and mingling and raving about how much fun they were having. When the weather got a tad bit chili some guests moved the fun inside to the NoMI dining room . Kudos to the whole Park Hyatt team, from my past interview with Lynne she acknowledged that all they do at Park Hyatt is a team effort and this party was certainly a great example of that.