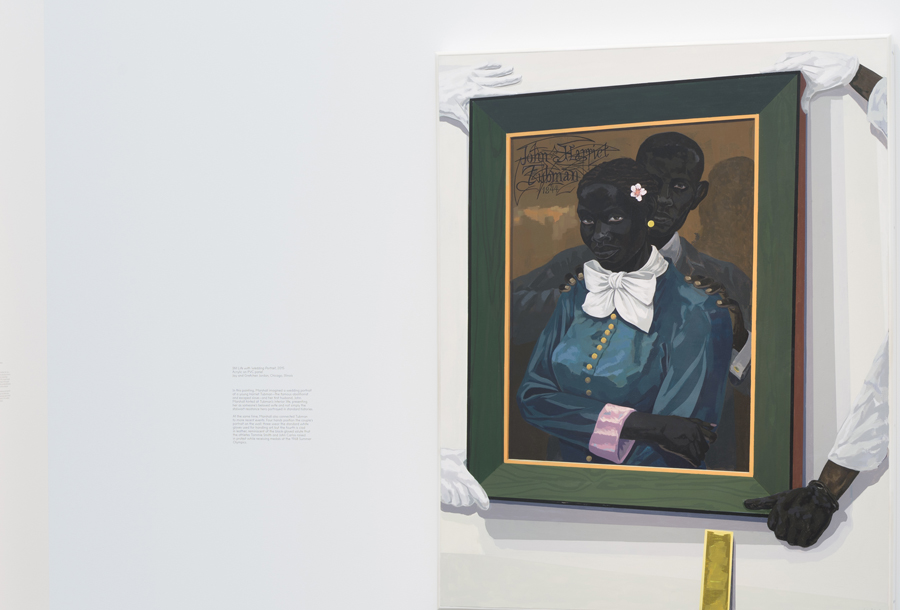 Although the art world could not contain its excitement over Leonardo Da Vinci’s Salvator Mundi (ca. 1500) painting that sold for a record $450.3 million, another master of the art world was quietly setting a record as well. Chicago’s own Kerry James Marshall, whose painting Still-Life with Wedding Portrait, which depicts Harriett Tubman and her first husband John, was sold for a record $5.04 million. On the same day the Christies auction where the Leonardo Da Vinci’s Salvator Mundi went up for sale, Marshall’s Still-Life with Wedding reportedly “drew strong bidding, eventually selling for $5.04 million with buyer’s premium, a new record for the artist at auction, and a figure well above the $1.5 million high estimate the auction house had tagged to the piece.”

This sale is amazing (and maybe disappointing) on several fronts. On the one hand, it’s amazing to see that a great artist like #KJM Kerry James Marshall who has been actively involved in the art world for a long time, whose work is unapologetically black and has been a big proponent of helping other black artists gain access into institutions, garner a high price for his work, yay!!! On the other hand kinda sucks because Marshall donated the piece to the MCA’s 17th Benefit Art Auction, one they have every 5 years or so, that went on to raise $2.23 million.  If you’ve followed this website for some time you’ll remember I covered this same painting in 2015 when it was auctioned off (by Sotheby’s rep) at the MCA charity art auction benefit and going for $750,000 to area billionaire (very quiet money) Jay and Grechen Jordan (see article). If I am not mistaken, since it was a charity sale, part of that was tax deductible.  Its incredible to see the piece go on the auction block so fast but what a way to flip some money in the process, I guess. It’s yet to be revealed who won this Christies auction for the KJM piece or if it will ever be seen by the public again as it was during Marshall’s recent “Mastry” exhibit, focused primarily on his work made over the last 35 years and co-curated by Dieter Roelstraete; it opened at the MCA in April 2016 then traveled to the Met Breuer at The Metropolitan Museum of Art New York and the Museum of Contemporary Art Los Angeles.