Talk about getting it right. Jackie Aina, aka Lebronze James aka Naira Banks is about to be a wife. The Youtube beauty and fashion mega Influencer’s boyfriend Denis Asamoah, her partner of many years known to many of her multi million followers as Mr. Work Smarter as well as their joint Youtube page Denis & Jackie,  popped the question during their Greece getaway in the most romantic way ever imagined. 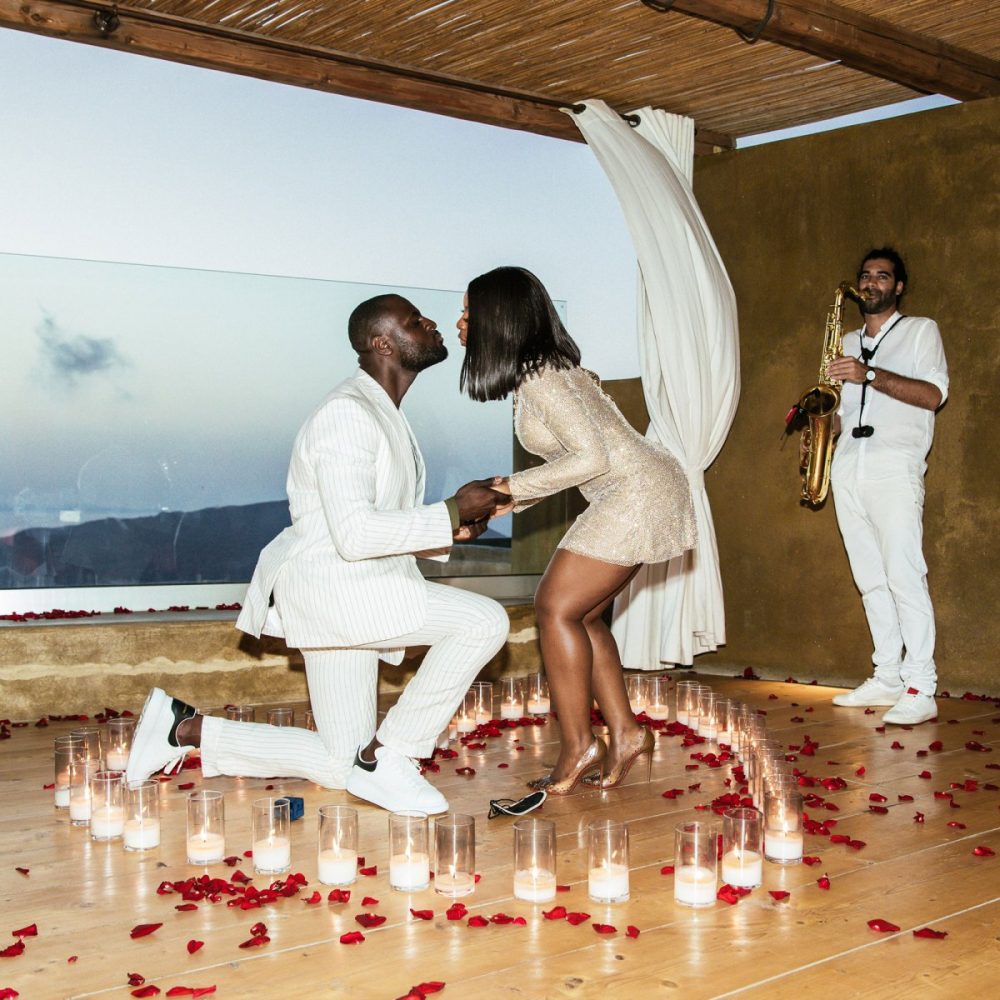 Though Aina shared images of the ring over the weekend via Instagram the trip actually took place a week or so ago (their vacay blog was uploaded a week ago per Youtube) to celebrate Aina’s 32nd birthday;  a couples trip to Santorini, Greece Jackie’s favorite place, “Jackie told me Greece is her favorite place in the world and she wanted to go back.” The couple stayed in a private villa at the Andronis Luxury Suites. 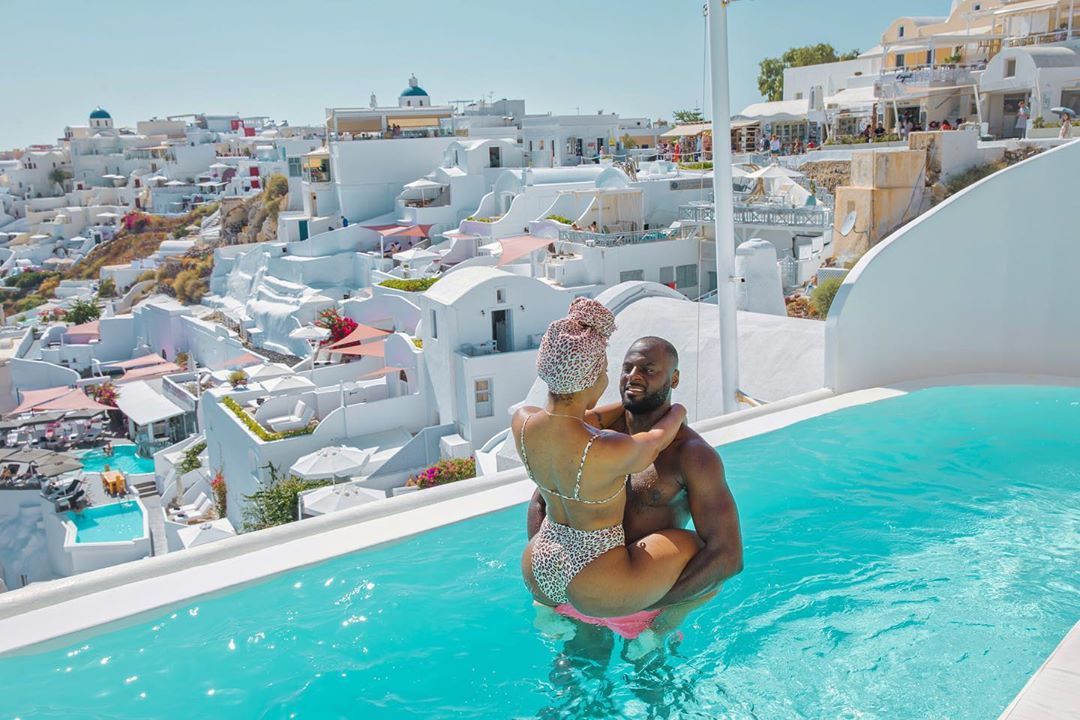 We stayed in one of their private villas that captured the magical views of the sun setting over the caldera. Open space with bedroom, living area and stylish bathroom. Comes with 1 sink but u guys know we prefer 2 😂 typically when I stay in Europe hotels the shower pressure 🚿 is weak, but it was powerful 😎 also comes with heated infinity pool 🏊
Location is perfect for getting around, eating and shopping at local shops.
What made this villa extra special is that we had a private entrance and roof top ensuring total seclusion. There were so many times, random people would try and use our private area to take pictures but security was on top of things.
Lastly you get a mobile phone to call your butler anytime. Available 24hrs for any issues or car bookings.
Butler service is standard with the Villa along with complimentary arrival and departure transportation with a luxurious car. That reminds me, there are limited taxes in Santorini so make sure you book your cars 🚙 30mins before schedule. And for those that like to party Fira is the best location!

Speaking to US Magazine, Asamoah and Aina detailed the before, during and after of the proposal. According to Denis this is how the proposal went down 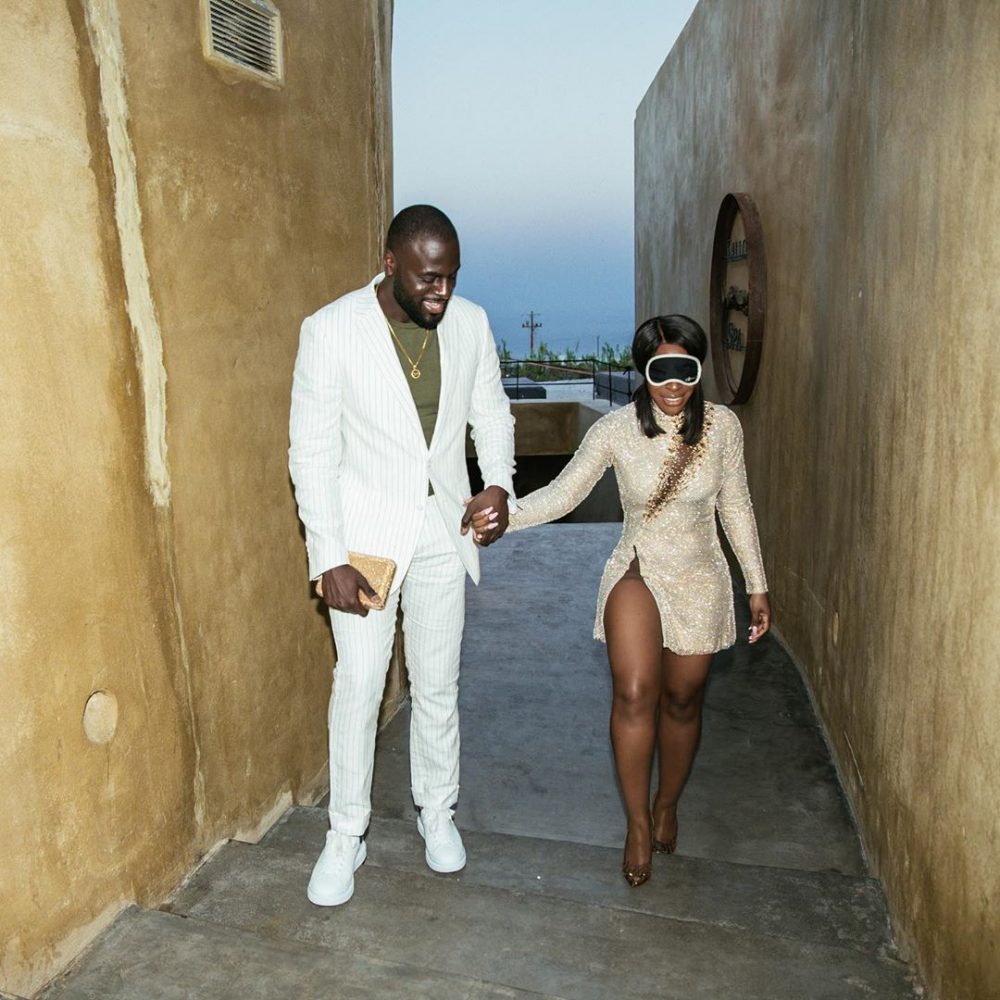 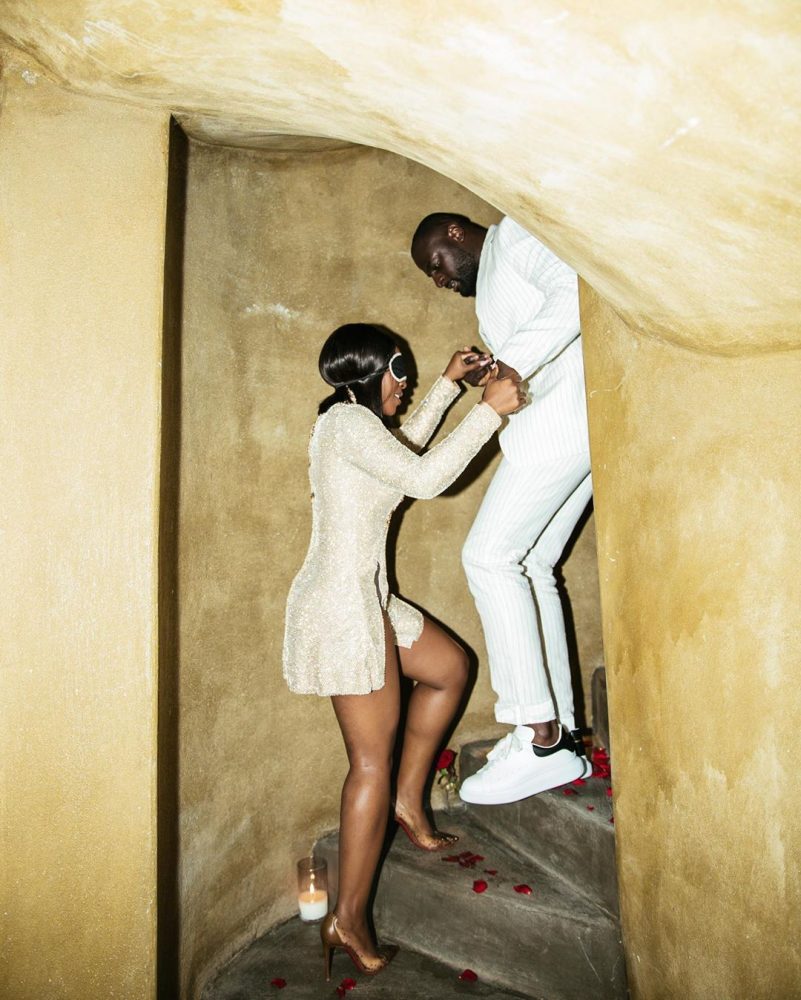 it was not easy getting @jackieaina up these stairs. It was very tight but we managed to get through so many steps 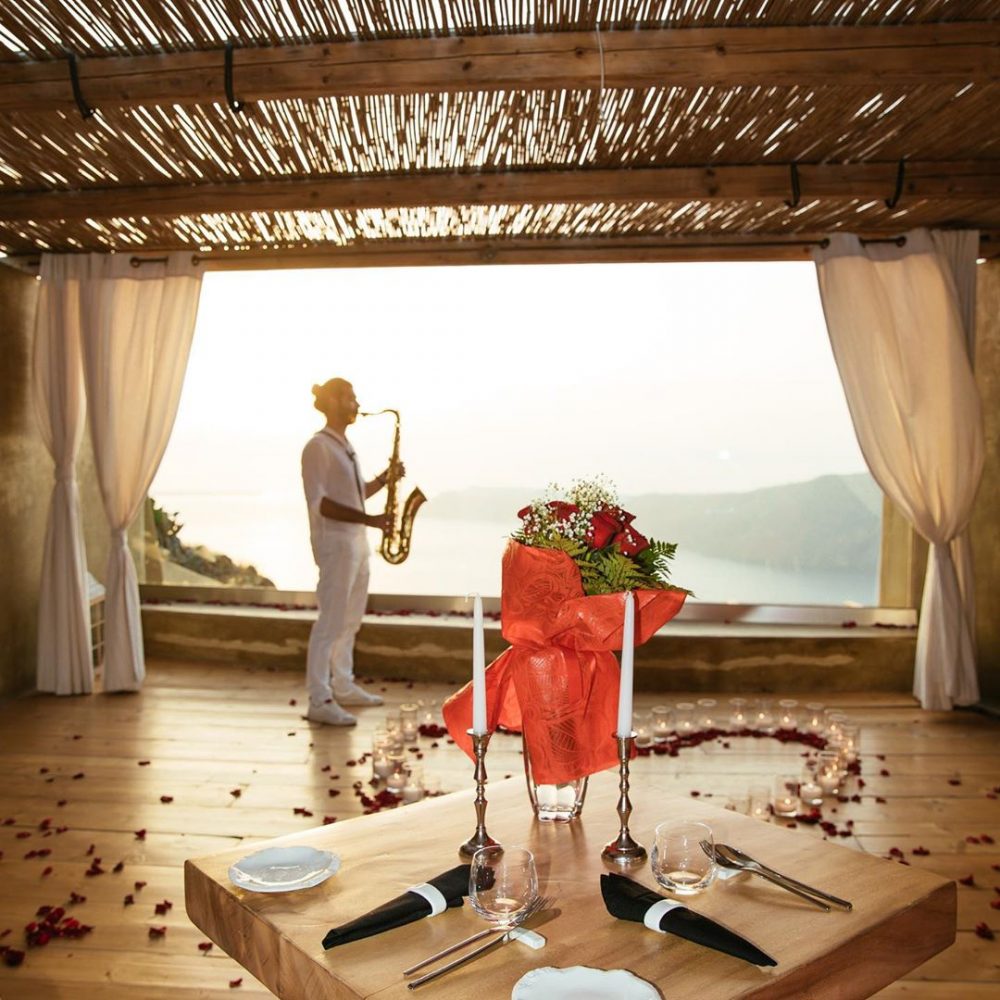 The proposal took place on a private rooftop and had a direct view to the sunset! This terrace was the perfect setting for a private dinner and proposal. Sade is Jackie’s favorite artist and I had a saxophonist 🎷 play her favorite hits throughout the night. 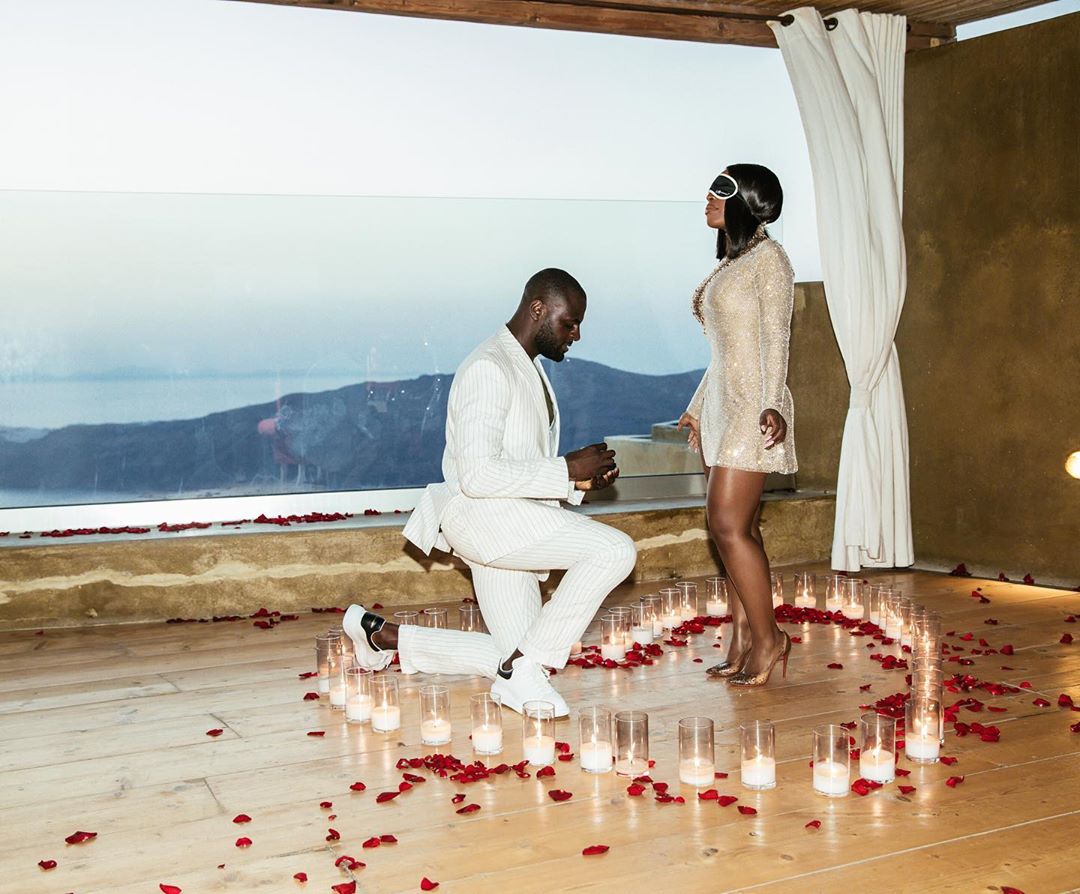 After walking up a number of stairs and Jackie nearly falling into the candles it was at this point, I went down on my bad knees, and took out the ring, and prepare to say my speech. Whilst she was dancing to “nothing can come between us” I was struggling to get the ring box out of my pocket. I eventually got there in the end 😀

“When I first figured out what was going on, I thought, ‘Damn, I’m not wearing the right nails.’ I wanted them to be a glittery, sparkle situation! But it was so beautiful. Denis had all these candles up the stairs, in a heart up there, flowers and we had dinner overlooking the ocean.”

After she said yes, they called their parents and family members and then they celebrated!

Jackie Aina who has over 3 million subscribers on Youtube was awarded WWD’s Influencer of the Year 2018 award.