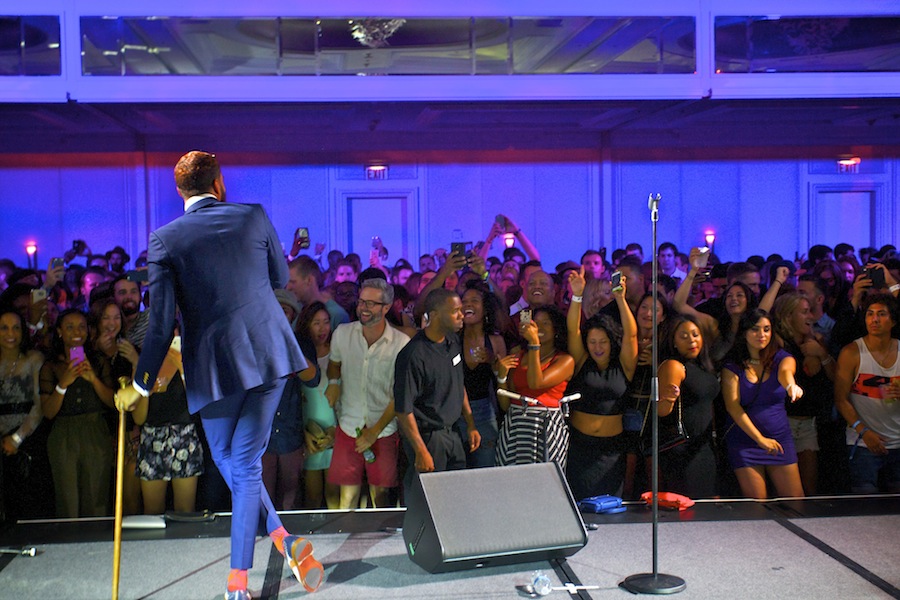 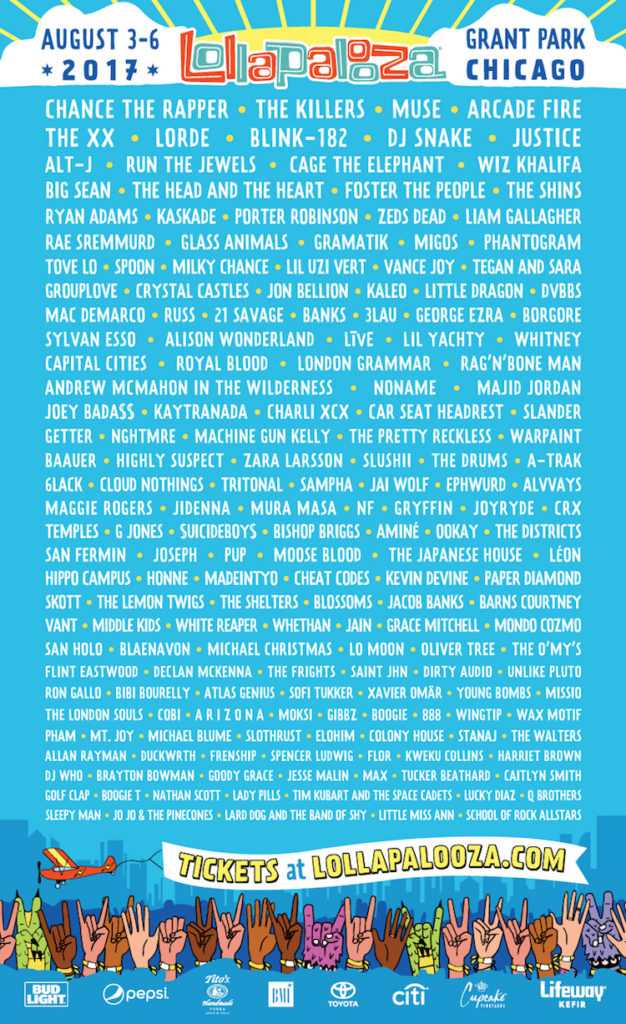 Lollapalooza, celebrating its 25th anniversary and the OG version before satellite fests in Chile and Paris, will take place in Chicago from Thursday Aug. 3 to Sunday Aug. 6. Though the actual fest is sold out (your chances of getting tickets rests on resale market, radio station raffles or to scale a fence without getting caught); this year’s Lollapalooza headline performers include Muse, Lorde, Lil Uzi Vert, Justice, Arcade Fire, Kaskade, Chance The Rapper, The Killers. Whether you have a one day pass, 4 day pass, VIP or none that doesn’t mean you still can’t partake in some #Lolla enjoyments. For those of you looking for  fun outside of Grant Park, we have listed below many of the parties, after-parties, pre-parties, not really affiliated with but becuase it Lolla weekend, parties. Some of these events are by invite only and some are complimentary registration. If celeb sightings is your thing, best bet outside of Grant Park grounds will probably be at Studio Paris, Underground or Lollapalooza hospitality suites. 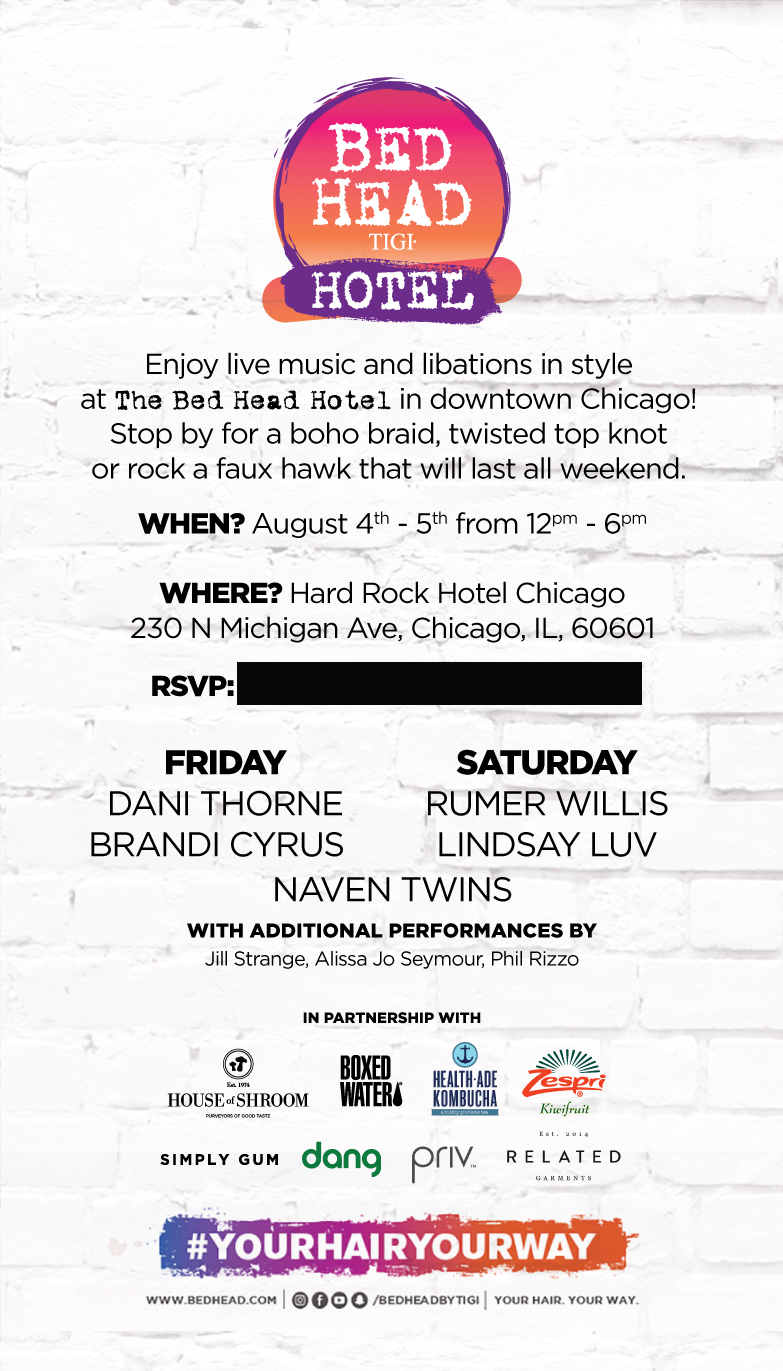 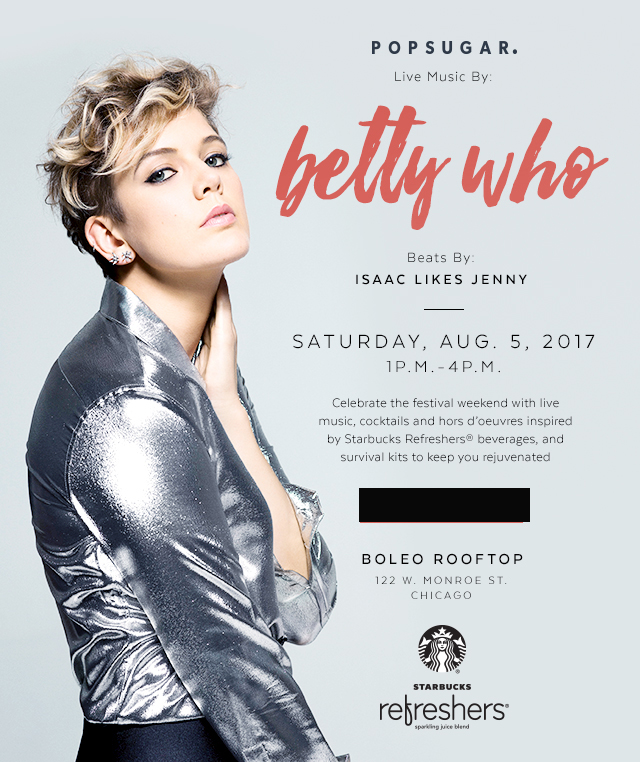 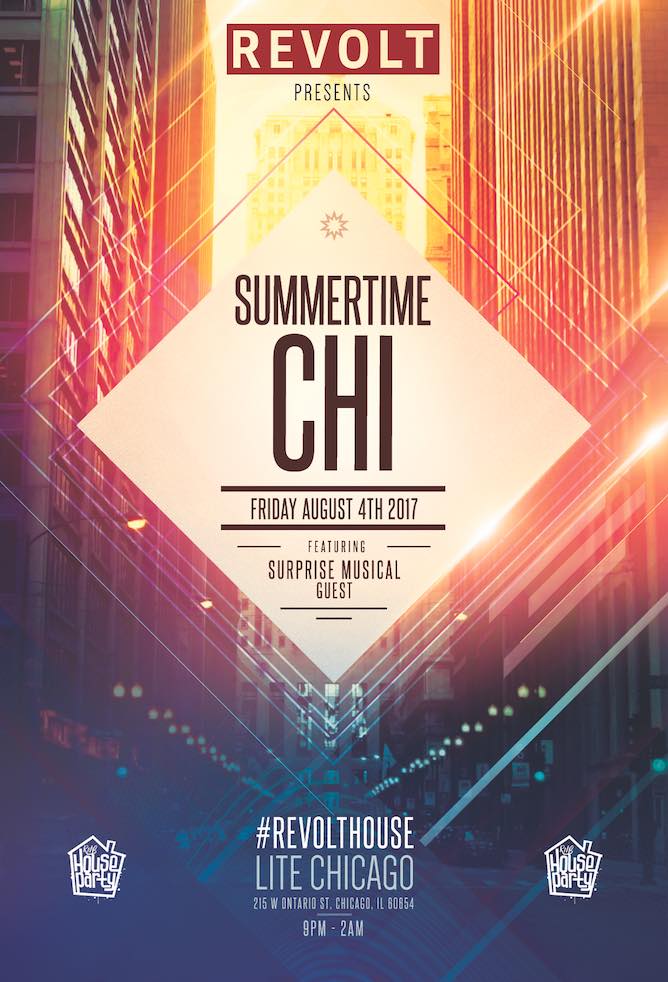 RNBHouseParty is joining forces with REVOLT for RNBHouseParty REVOLT Edition on Lollapalooza Friday night. This event is specifically for those who like to dance at parties like we used to do growing up!  We are playing all the jams you can sing along to and will feature a live performance you don’t want to miss!  This event is FREE with RSVP, so get your team together and issa vibe! Fri, Aug 4, 2017, 9PM-2AM. LITE Chicago 215 West Ontario St.
***Disclaimer if Sunshine Anderson means nothing to you, this probably isn’t the party for you*** 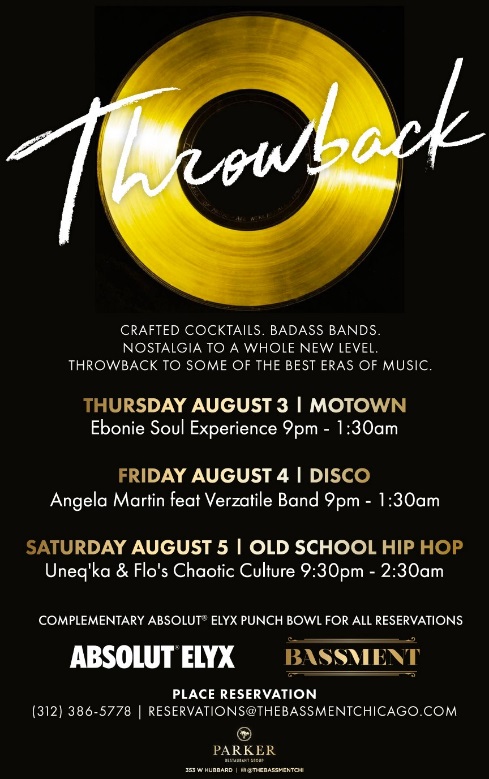 Rolling Stone Magazine’s seventh Lollapalooza day party, featuring performances from Run the Jewels, Chicago MC – and Chance the Rapper’s brother – Taylor Bennett and British musician Bishop Briggs, with a DJ set from Foster the People’s Mark Foster. The event, presented by vitaminwater, will take place August 5th at Studio Paris in Chicago between 12 p.m. and 4 p.m. CT. Complimentary cocktails will be provided by Hornitos and beer by Miller Lite. Run the Jewels, unlikely pairing came together in 2012 when El-P was tapped to produce Killer Mike’s 2012 solo album R.A.P. Music. After lengthy careers as underground hip-hop favorites, they began to reach a wider audience as Run the Jewels with a brash mix of unparalleled lyricism, lefty politics, stoner wit and plenty of hedonism. 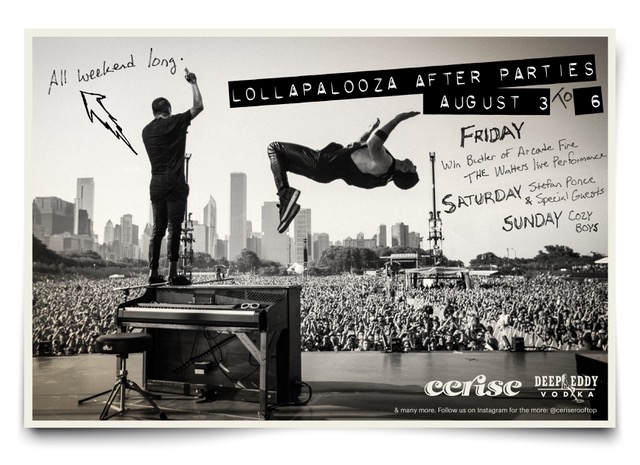 The Dive is opening its doors for the first time with an evening of intergalactic music curated by Audiotree & LHST. Get it together and make some noise as we pass the mic to She’s Crafty, Chicago’s all-female Beastie Boys tribute! MCAmy (Amy Sumpter), MagRock (Maggie Tomasek), Ken D (Kendra Stevens) and DJ ENRG (Erica Reid) rhyme the rhyme well in honor of the greatest musical group of all time. 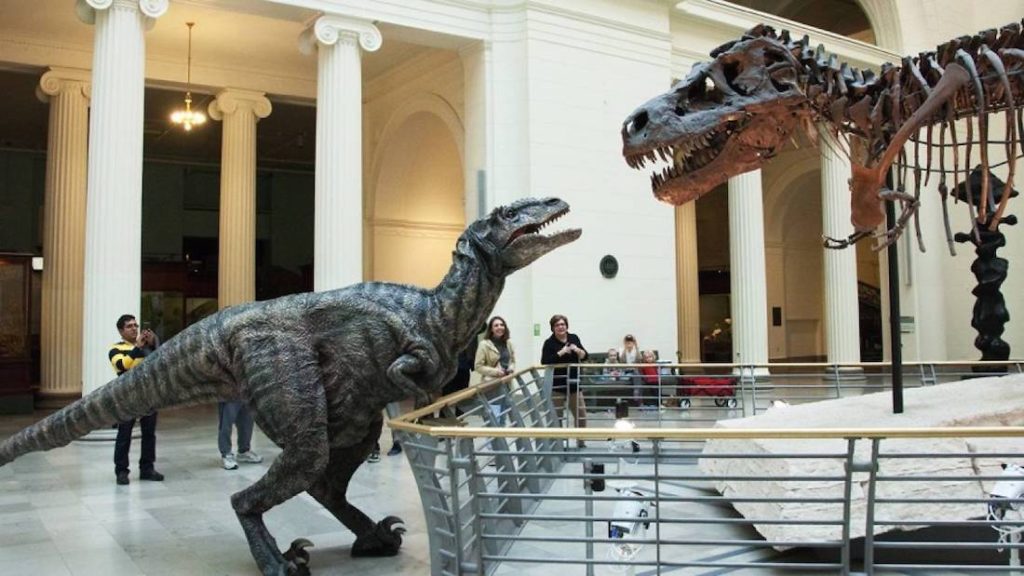 The Blackstone, Autograph Collection will host a special Lollapalooza pre-party event, DJ and Dinos, during its weekly Blackstone Beats live music series featuring DJ sets and an appearance from the elusive velociraptor from “Jurassic World: The Exhibition.” Guests can get up close and personal with the a live raptor, unleashed from the exhibition’s Raptor Paddock, in the hotel’s lobby. The event is complimentary and open to the public, with classic cocktails and small bites available for purchase from The Blackstone’s cocktail lounge, Timothy’s Hutch. Guests are not required to register for this event.

Lucky Brand, American-heritage denim brand joined by Brandy, DJs, Brandi Cyrus, Jacqueline Rezak, Chris Masterson and HXLT for Lucky Lounge presents City Jam. Lucky Brand is bringing back the 90s house party, West Coast style! Transforming Freehand Chicago with two floors full of activations – including a live performance by Brandy – that will bring nostalgia levels to an all-time high, along with DJ sets to that are sure to keep the party going during one of Chicago’s most fun-filled weekends for music lovers and fashion influencers.
WHEN: Saturday, August 5th, 2017, 10pm – 2am
WHERE: Freehand Chicago
19 East Ohio St, Chicago, IL 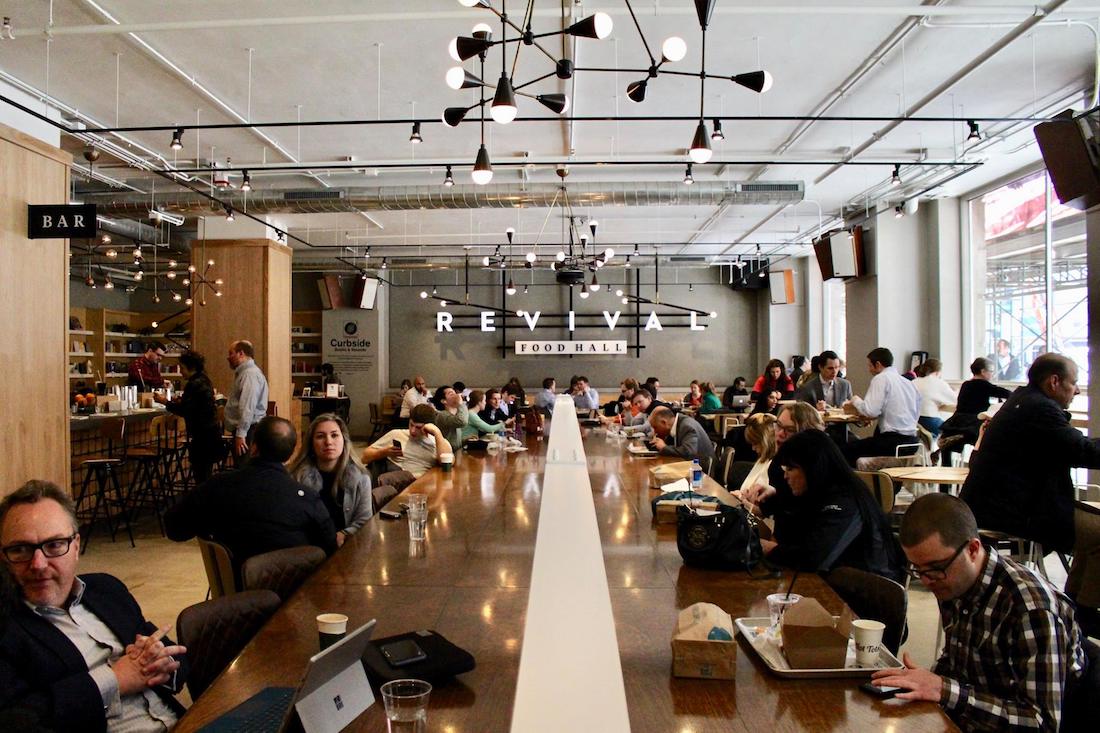 Must See Films At The 23rd Black Harvest Film Festival